Daily art -- on my mind again


Daily art is never off my mind -- for the last 13 years I've done a daily art project of some kind, which  means that I'm always thinking of what to do today and reflecting on what I've done recently.  But in December it's on my mind in a more expansive sense, because it's time to decide what to do next year.

Some years I have decided on my daily art project on December 31.  One year I didn't decide until January 3, but made it legal by defining the project as occurring on days when I didn't see my mother in person (I had been visiting her over Christmas and New Year's).  Other years I have eagerly anticipated the change of rules for some time.

For the last three years I've been doing daily collage, and have I learned a lot!!  My art has become more accomplished, more confident, perhaps more sophisticated.  I have even learned to freehand-cut cute little guys without any advance markings.  The last two Decembers I decided that I had not yet exhausted the possibilities of daily collage, and chose to re-up for another year, with slight changes in the rules.  But this December I think I'm done with collage, at least for 2016. 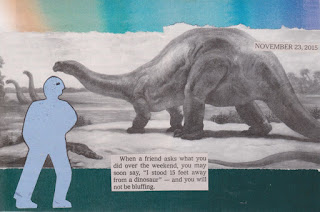 Instead I'm taking a brave step (for me) and committing to daily drawing.  I have been terrified of drawing since age 4, ever since my father, a gifted draftsman, noted that I couldn't draw for beans and decreed "Kathy is not an artist."  I won't say that the decree warped my soul in any way, because I found plenty of other things to be.  But I do feel stress when I pick up a pencil and attempt to render any type of object meant to be recognizable.

I am not committing to realistic drawing.  At least the way I'm defining the rules for 2016, an abstract doodle will be perfectly OK, as long as it fills the page.  But I might even try to draw an apple or a landscape or a person!!!! as long as it doesn't set off an anxiety attack.

As with so many other projects, this one begins with the purchase of equipment.  The last time I was at the art store I bought not one but two little sketchbooks, because my plan is to fill one sketchbook, working with the same paper and dimensions, before moving on to another.  And all I can tell you is that it would be nice if I could find the damn sketchbooks I bought before January 1, else I'll have to  make a fast New Year's run to the art store for a new one.

I bring this up not just because it's looming large in my mind these days, but because this would be the time for you to consider whether you want to do a daily art project for the New Year.  I encourage all my art friends to try daily art and see if it works for you (maybe it won't) and have found that it helps to have an auspicious starting date.  I have always started on January 1, but some people start on their birthday or on whatever day it happens to be when they get a good idea.

I've written plenty about daily art in my blog over the years (here is the full array of articles in case you need to drop out of life for an hour or so) but if you're thinking that maybe daily art is for you, read this one.  And you can check out all my recent daily art here.