Catching up on my digital reading for the week, I finally got to read a review from Hyperallergic about a show of quilts at the Baltimore Museum of Art.  They're made by Stephen Towns, a black artist who turned from his customary painting practice to make a series of ten quilts depicting scenes from the slavery era.  In particular, most of the quilts focus on Nat Turner, who led an unsuccessful slave rebellion in 1831. 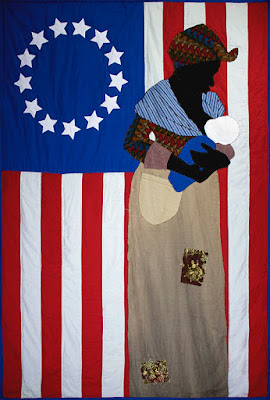 Stephen Towns, Birth of a Nation

I was impressed that the review avoided almost all of the cliches that sadly show up in so many critical discussions of quilts as art. The reviewer did not make a big deal out of Towns being a man in the predominantly female world of quilting.  There was no mention of these quilts not looking like grandma's quilts.  There was no flogging of the fake history that quilts were used to mark the route of the Underground Railroad.

I was also impressed that Towns apparently made the quilts himself by hand -- the review talks about his bleeding fingers -- instead of farming the work out to his mom.  I liked the fact that he ransacked his parents' home for scraps from clothing made by his mother and sisters.  Most of all, I was impressed that these quilts were hung in a mainstream art museum.

If you're in the vicinity of Baltimore, you might want to check it out; the show will be up through September 2.  And I can testify that the rest of that museum is pretty wonderful too.