A fascinating exhibit at the Speed Art Museum in Louisville focuses on women artists who came to Paris during the second half of the 19th Century even though the deck was seriously stacked against them.  They couldn't attend the big art schools, had a hard time showing their work through the official Salon, couldn't draw nude models, couldn't go to certain public places without chaperones, were advised by their teachers to abandon art when they got married.  Nevertheless they came, and they learned to paint, and they made lovely paintings.

I was impressed by how many of them had success despite these obstacles.  Many had work eventually accepted to the Salon, a few were given honors such as the Legion of Honor.  Of course the praise was grudging -- lots of critics' remarks quoted on the wall signs to the effect of "it's astounding that a woman painted this!!" 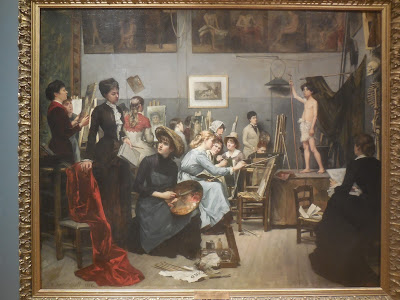 Marie Bashkirtseff, In the Studio, 1881

The Académie Julian was one of a few small art schools that admitted women.  Originally it allowed male and female students to work in the same room from a nude model (gasp!) but after too many gasps had to have separate studios for men and women.  Here's the women's studio; Marie, who was from Ukraine, is center front with black dress and big palette.

I was unfamiliar with most of the artists in the Speed show; many of them returned to their native countries after studying in Paris and did not have a chance to make names for themselves internationally even if they were well-regarded at home.  I had heard of only four: Berthe Morisot, Mary Cassatt, Rosa Bonheur and Paula Modersohn-Becker.

More tomorrow, with lots of pictures.  Meanwhile, click on the link at the top of this post and you can watch a slide show of many of the paintings from the show, which is up through May 13.
Posted by Kathleen Loomis at 12:29 PM