Recently I started a challenge to myself in my daily map project, having to do with the map of the United States.  What is more familiar to us than that map -- we see it every day in the weather report, not to mention on schoolroom walls, in textbooks, in road atlases, and who knows where else.  But I bet few of us know it so well that we can draw it without a cheat sheet.

I decided a map of the lower 48 would fit nicely on the page of my sketchbook, so I set out to draw it.  I have been working quite a bit with copying maps from books, and enjoy trying to make good replicas by eye.  I decided it would be a good challenge even if I had a map to copy from, so I tore out the weather map, which had the outlines of the states, and set to drawing.

And I should mention that I draw in ink, a deliberate choice of medium that encourages you to get it right the first time.  (I love the ink lines; pencil seems too tentative, too faint.) 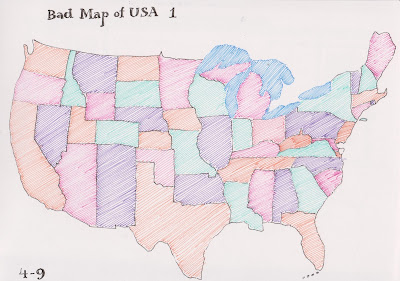 The outer perimeter of the map turned out pretty accurate, especially the Great Lakes.  But when I started filling in the states I ran into difficulties.  I would start from one corner and start to draw states, and maybe start again from another corner, but when it was time to meet in the center things didn't work out all that well.

Arizona and New Mexico ended up twice their real size, while Montana was half its real size.  Texas ended up with an interesting northern edge, Tennessee was just downright strange and you can't find Delaware at all.

So I decided to do it again the next day. 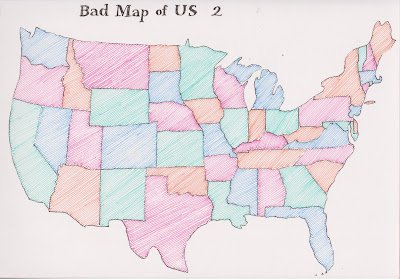 This time things turned out better; I was careful to get Arkansas where it belongs.  New York, West Virginia and the Dakotas flunked the shape test, but Maryland and Delaware were a whole lot better.

I was so excited with this exercise that I wanted to do it every day.  Only problem: it took me two hours to draw the map and color it in.  That's more time than I'm willing to devote to daily art, so I'll have to wait for days when I'm sitting around a table all afternoon talking and drawing.

If I do the map often enough, maybe I can achieve two goals by the end of the year: to be able to draw a stunningly accurate map while consulting a real map, all the states having their proper shapes and sizes; and to be able to draw an accurate map without consulting a real map.  I think those are two separate skills and it would be nice to get them both.

The next week I decided to draw the outline of the United States while consulting my cheat sheet, but try to fill in the states from memory.  This was such a spectacular failure that I drew over it again and again, trying to get a bit closer.  Still need a bit of work on those skills. 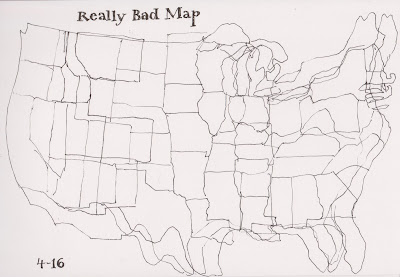