Every morning I get an email from Hyperallergic, a newsletter that covers the art scene (I recommend it to anybody who's interested in the wider world of mainstream art).  Today's included a story about a woman who stole a rock from a Yoko Ono exhibit at a museum in Toronto. 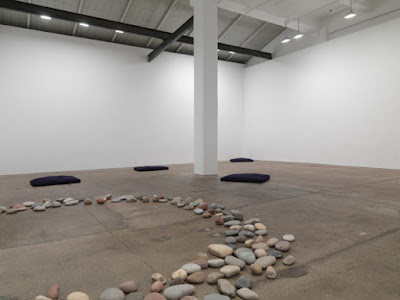 The exhibit consisted of a whole lot of river stones that were apparently arranged artfully on the floor.  Some of the stones were inscribed with messages such as "love yourself", written by Yoko herself.  The shtick of the exhibit, which the museum describes as "collaborative," is that viewers are supposed to pick up a stone while "concentrating on the word and letting go of their anger or fear."

Then, presumably after the anger and fear are gone, they're supposed  to put the stone back with the others.  But a woman picked one up and failed to put it back.  It's all on surveillance footage, and Toronto police are looking for the perp.

But I have mixed feelings about this story.

First off, you know I have a jaundiced view of these "collaborative" or "relational" art projects, having devoted too much of my own time to participating in one a couple of years ago.  The plan is to make people feel all warm and fuzzy by picking up the rock and thinking about loving themselves, or helping to mend a broken teacup (another part of the Ono show in Toronto).  According to Hyperallergic, this approach is "encouraging viewers to engage intimately with artworks."

Sometimes, I guess, such exhibits can make you think deeply or feel great emotion, but mostly I find them manipulative and cynical.  Geez, "love yourself" is kinda shallow, not to mention unoriginal, don't you think?

But third, here's what really got me crabby about this story: the stone was described with a straight face as "valued at $17,500."  Hmmm.  Are they selling individual rocks in the gift shop for $17,500?  That would make that whole big pile on the floor (who knows how far it extends beyond the photo) worth -- what? -- millions?  In the next room was a setup where viewers were invited to use hammers and nails to stretch pieces of string to make "lines in space."  I wonder what a piece of string or a nail would be "valued at" if some viewer, in the spirit of collaboration and intimate engagement with art, decided to take one home?

I don't recommend that museums allow people to take home the art -- although there have been lots of "relational" projects in museums that do exactly that -- but for heaven's sake, if somebody takes home a rock, and you think it leaves a terrible gap in the pile on the floor, go get another rock.  It won't cost you anywhere near $17,500.

This sort of pretentiousness is what gives art a bad name among ordinary people.  What do you think?
Posted by Kathleen Loomis at 11:12 AM