Earlier this year I wrote about an exhibit of women painters who studied in Paris during the Impressionist years; one of the paintings I liked was done by Anna Ancher, who is considered one of Denmark's greatest artists.  When we were in Copenhagen in May, buying our tickets to the national gallery, I mentioned that I had seen Ancher's work in the show in Louisville and was looking forward to seeing more of it.  The ticketseller, a young woman who was studying art history and knew all about Ancher, was so excited to hear that we Americans had heard of their national treasure, wanted to know more about the U.S. show, and showed us on the museum map exactly which room to go to.

There were two Anchers on display. 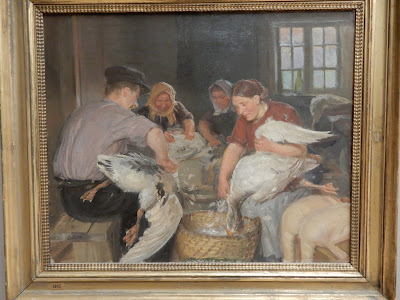 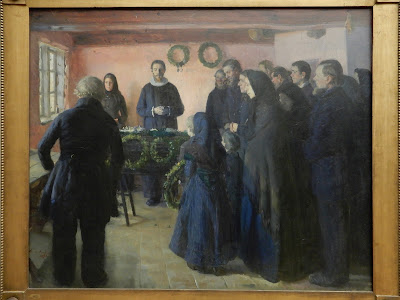 I know that deathbeds and funerals happen in every country and every time period, but it seems that they were an especially popular subject for art in early-20th-century Scandinavia.

In the next room was a funeral scene by a famous Danish painter. 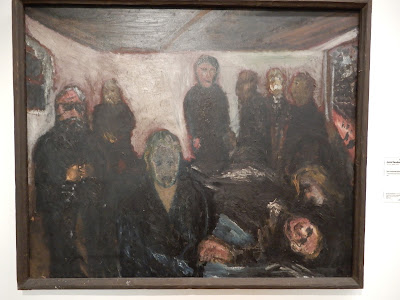 And what Scandinavian collection  would be complete without a deathbed scene by Edvard Munch -- one of his recurring themes; I've seen an awful lot of these in museums here and there. 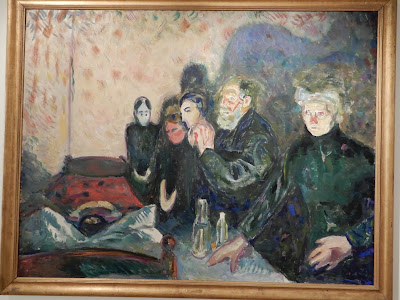 I like this period of art -- moving gradually past slavish photorealism, but still recognizable depictions of everyday life.  Munch is one of my favorites, but it's always nice to be introduced to other artists famous in their own countries.
Posted by Kathleen Loomis at 5:31 AM