Seeing photos last week of the Trumps' gala dinner at Blenheim Palace, outside of London, reminded me of our visit to Blenheim Palace a couple of years ago, during which we saw some Serious Art -- and I never got around to writing about it.  So here's my belated report to you.


The fabulously grand Blenheim Palace was built about 300 years ago as a gift from Queen Anne to John Churchill, the first Duke of Marlborough, who led British forces in the Battle of Blenheim, which won the War of the Spanish Succession.  Winston Churchill, whose father was the third son of the current Duke, was born at Blenheim Palace and is buried in the churchyard of the local parish.

When we visited the palace it was the site of an exhibition of work by Ai Wei-Wei, the great contemporary artist from China.

In the palace courtyard, two of Ai's "Pillar" sculptures were installed between the indigenous pillars.  These are tall-man-size vases, suggesting the human form; he has made many of them. 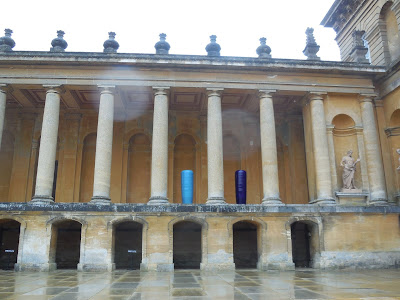 In the huge reception hall of the palace, Ai's crystal chandelier looked totally at home.  He has made many chandeliers, in different forms, to comment on the extravagance of contemporary Chinese consumer culture.   Ai's father, a poet, was one of the victims of China's Cultural Revolution, sent into exile in a labor camp when Ai was one year old.  He grew up without lamps or candles in the home, let alone chandeliers. 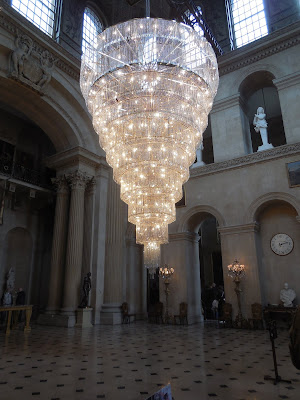 By contrast, you immediately walked down a hallway covered by a carpet that replicates the surface of a dirt road with tank tire tracks. 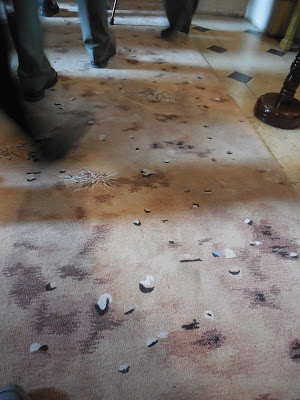 More about the Ai exhibit in another post.
Posted by Kathleen Loomis at 5:54 AM