Before we went to Europe this spring, I read a story in the New York Times about a statue in Copenhagen commemorating a black woman, called Queen Mary, who led an unsuccessful revolt against harsh labor conditions in the Danish island of St. Croix in 1878.  It was described as the first statue of a black woman anywhere in Denmark, and I thought it would be nice to see it in person -- and I did get that chance.

The statue sits outside an 1797 warehouse (Denmark's Caribbean possessions had sugar plantations, and the building, now preserved as very high-end waterfront real estate, originally handled slave-grown sugar and rum).  The warehouse is now a museum of sculpture and a replica of Michelangelo's David has stood outside for many years.

The statue of Queen Mary was made by La Vaughn Belle, an artist from the U.S. Virgin Islands (Denmark sold its islands to the U.S. in 1917) and Danish artist Jeannette Ehlers.  It's placed symmetrically at the other side of the museum and was designed to be exactly as tall as David. 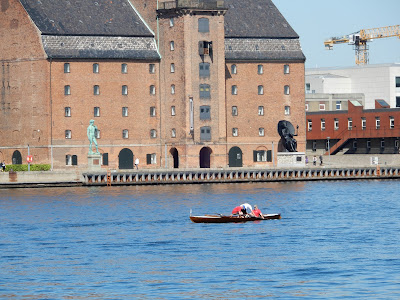 The statue shows Queen Mary sitting on a wicker throne, holding a torch in one hand and a cane-cutting machete in the other. 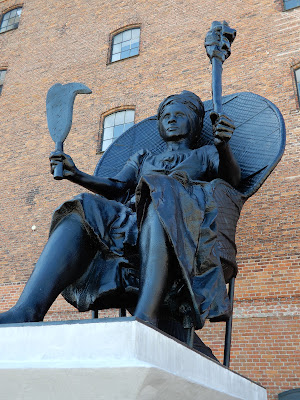 The statue is installed only temporarily, and in fact the statue itself is temporary -- our guide said it was made of some kind of styrofoam-like material.  Eventually the artists would like to raise enough money to cast it in bronze; not sure if it could stay in this location if that happened.