Form, Not Function: Quilt Art at the Carnegie, our local annual juried show of art quilts, opened the day after I got home from Europe; I attended the opening reception in a jet-lagged haze and barely remembered what I had seen.  A week later, still jet-lagged, I went to see the show again with my friend Paula Kovarik, who had been one of the jurors but hadn't been able to get here for the opening.  I took a lot of pictures but didn't feel up to writing about the show in the aftermath of my unexpected eye surgery.

Now the summer has slipped away, FNF is about to close and I still haven't told you a thing about it.  My local fiber art group held its monthly meeting at the Carnegie last night and I am reminded about the most striking quilt in the show -- especially urgent and timely in light of this week's political events. 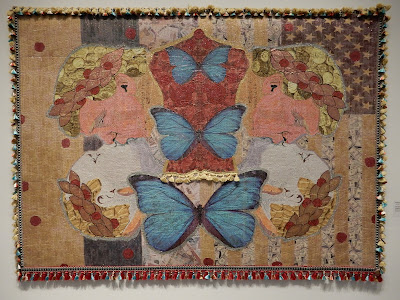 Yes, it's Trump and Putin kissing, against the Russian and U.S. flags as a backdrop.  In the center, cheerful butterflies; everywhere, money: coins and gold bars make up their hair, bills stand in for the white stripes of the flags. 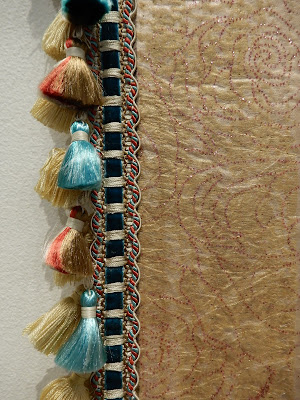 Lots of gaudy fringe trims the central figure and edges the entire quilt.  At the opening I chatted with Arturo and said "What's with the fringe?  I never took you for a fringe guy."  He explained that every time he sees a picture of a nouveau riche home there's fringe on everything, so what better shorthand for people with more money than taste.

I didn't ask about the butterfly, but I know that Arturo has made a companion quilt called "Dark" something or other, featuring an ominous black moth as the central motif, so I gather the two pieces are meant as yin and yang.

This is a very large and complex piece and I can't identify all the processes.  I think the background image was woven to order with the images of the faces; many other fabrics are raw-edge appliqued on top.  The quilting seems to have been done with "invisible" thread that has a lot of sparkle to it. 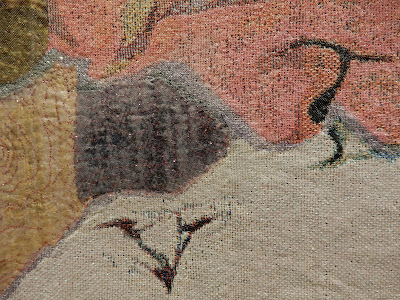 The first time I saw the quilt I didn't like it.  Each successive viewing has made me appreciate it more, and last night I was in awe at its prescience as well as its visual power.

Saturday is the last day for FNF, at the Carnegie Museum of Art and History in New Albany IN, just across the river from Louisville.