I'm all for recognizing the contributions of women to world history, and it's kind of endearing when scholars and museums earnestly point out how women have traditionally been left out of the story.  But sometimes they try too hard.

Witness this sign in the Vasa Museum in Stockholm.  The Vasa was a huge warship that sank a few minutes after it was launched in 1628 (it was so huge and grand and full of cannons that it was topheavy) and was found and recovered only in 1961, perfectly preserved by the cold dark waters, along with a whole lot of stuff.  If you find yourself in Stockholm, this should be the first place you go, and you should stay a lot longer than our tour guides let us do. 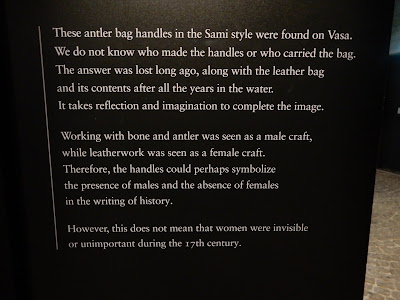 In case you can't read it from the photo, the text says:

"These antler bag handles in the Sami style were found on Vasa.  We do not know who made the handles or who carried the bag.  The answer was lost long ago, along with the leather bag and its contents after all the years in the water...

"Working with bone and antler was seen as a male craft, while leatherwork was seen as a female craft.  Therefore, the handles could perhaps symbolize the presence of males and the absence of females in the writing of history.

"However, this does not mean that women were invisible or unimportant during the 17th century."