The artworks were somewhat incongruously displayed in the ornate formal rooms of the palace, and our docents didn't seem to know what to say about them -- a few awkward and clueless words, then on to the important stuff: the furniture and the family portraits.  There was no signage anywhere in the palace, nor any brochures to read.  So I suspect 90 percent of the visitors got little to nothing out of their art exposure.  Too bad, because this is world class art!

One of Ai's recurring themes is the problematic status of the individual in the current repressive regime.  Ai himself was under house arrest for a time, and forbidden to leave China for years afterwards, so he worked on the Blenheim exhibit long-distance.  His passport was returned in 2015 and he now lives in Berlin.

Ai typically acquires old stuff and reworks it, as in this sculpture using three-legged stools.  In the past every Chinese household owned at least one stool, but many of them have been discarded, replaced perhaps by plastic chairs?  In some other artworks Ai has taken hundreds of the stools and displayed them in installations.  In this one, he has joined maybe a dozen into a puffball of legs.  I'm not sure about the metaphor -- are individuals stronger when they hang together?  Or have the individuals, forced into formation, been robbed of their ability to stand on their own? 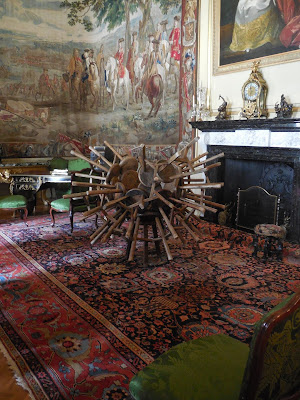 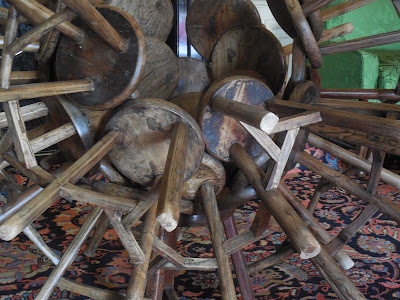 In another room, Ai made hundreds of porcelain crabs to recall a big party he threw for his friends when he was arrested.  He had arranged for the crabmeat before he was hauled away, but the party went on without him.  The crabs come in two colors, red and gray; he has observed that if you're a gray crab, blending into the landscape, you may be safer than the red crab who stands out.  (But don't they all get eaten in the end?)

(Please forgive the photos -- my camera couldn't seem to decide what to focus on and we were hustled away before I could get a better shot.) 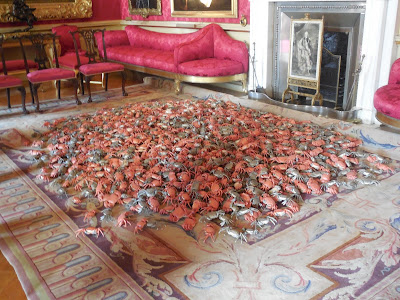 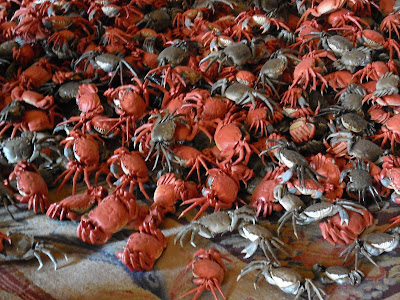