I wrote last week about craftsmanship and whether we as fiber artists should perhaps value it a little less than we do.  Some of the comments under that post made me realize that I did not make my point clearly enough.


When we're talking about traditional quilts, then craftsmanship is generally the most important element to be judged.  Yes, traditional judges like pleasant design and will take off points if a quilt is butt-ugly, but what they really like, I suspect, is lots and lots and lots of tiny stitches, points that match, perfectly stuffed binding with stitched miters at the corners, and no thread ends.  Even in modern quilt shows, such as the big ones in Paducah and Houston, which have "art" or "contemporary" categories, design may be equally important, but craftsmanship is still a huge issue.


That's the major reason, in fact, that I no longer enter shows like Paducah or Houston.  Not that my craftsmanship is shoddy -- au contraire -- but I don't want to be in shows where it is just as important as design.  I want to make work that is seen as art, not craft.  When your chosen medium is fiber and especially when your chosen format is the quilt, that's a hard objective to achieve.  One critical step in working toward that objective is to avoid places where you're in with traditional crafters.

I have identified a relatively short list of juried quilt shows that seem to focus on art more than on craftsmanship, such as Quilt National, Quilt Visions, and a few smaller shows, that I would like to be in.  Nothing against the more traditional quilt shows (in fact, I'm kind of sorry about passing up a chance to go to Houston this week, because I've always loved attending that show) but I don't want to enter them any more.   I want to play in a different ballpark, one where if you know what a mitered corner is you keep it to yourself, and it is in that context that I pose the question of how we ought to regard craftsmanship.


I've been keeping my eyes open as I read art reviews to see how the critics discuss craftsmanship.  Here's yesterday's New York Times:  "And where other artists might have chosen to delegate the manual labor, she was intent on doing the bulk of it herself..."
Do we detect a whiff of disapproval because the artist DIDN'T delegate the manual labor?  Or if not, at least a mild gee-whiz surprise?  Think of other artists who famously delegated the manual labor in their work.  The most prominent may be Donald Judd and his hands-free perfect manufactured minimalist boxes.


In fact, this spring there was a whole conference, in Portland OR, called "Donald Judd: Delegated Fabrication."  The conference promotional material said it would focus on "issues of authenticity and fabrication that continue to have lasting implications for artists today..... The simple question of how one maintains the integrity of the work even while at the same time taking advantage of skill sets of different people is a question that is at the heart of many different contemporary practices including designers, architects, historians, film makers as well as artists." 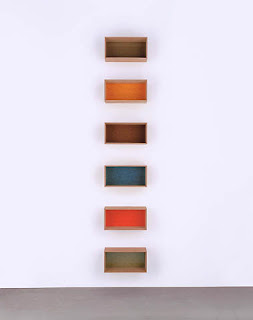 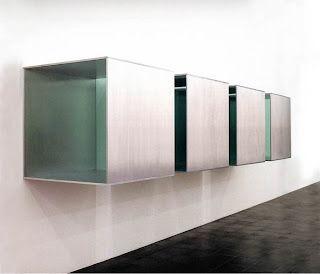 Other contemporary sculptors also delegate the actual making of their works to others.  Think Richard Serra and his huge Cor-Ten steel ellipses, Jeff Koons and his shiny metal balloon-dogs.  When you see the work in a museum, there's only one name on the wall sign, and it sure isn't the actual maker. 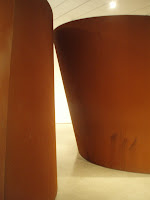 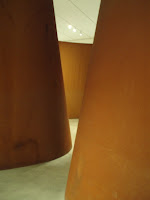 By contrast, in the fiber art world the artist is expected to make every bit of the work, or at least the important part.  If I want to enter Quilt National it's OK for me to hire somebody to quilt my work, but not to piece it.  (Which is another fascinating subject for discussion, but not today.)  And many of us fiber artists wouldn't have it any other way.  We love the making, and most of us greatly value the skill and craftsmanship we put into that making.  And in even the most prestigious quilt/art shows, such as Quilt National and Quilt Visions, the jurors and judges generally share that mindset.

So are we shooting ourselves in the foot?  By refusing to separate the idea from the execution, the plan from the fabrication, the concept from the craftsmanship, do we as fiber artists distance ourselves a bit from the mainstream art world?  I wish I knew.  What do you think?
Posted by Kathleen Loomis at 6:09 AM