I wrote yesterday about my system for sewing my postage stamp quilts together. The one I’m working on now, called "Postage 5: Epidemic," is the fifth in the series, and my general theory about series is that with each successive piece you try to master or explore something new.

When I sewed my first postage stamp quilt I had a terrible time with the columns twisting and getting tangled up, so when I did the second one I thought it would help to stitch each column onto a strip of Solvy, which would keep it from twisting and tangling. That was a good idea, until it came time to soak off the Solvy. I put the quilt into the bathtub and covered it with water. Came back in a couple of hours and lifted the quilt out of the water and hung it out to dry. Oops! The quilt was so heavy I could barely lift it up to hang from the shower rod. And the water in the tub was full of slimy thread ends. I was afraid to let it go down the drain, lest it permanently clog the pipes, so I spent more time than I care to remember fishing the threads out of the water, while the quilt dripped onto my shoulders all the while. Yuk.

I abandoned the Solvy and for the third quilt in the series, figured out that the columns would twist less if I secured them with two rows of stitching rather than one. Sure enough, that one went together smoothly and easily and I kept that method for subsequent quilts. 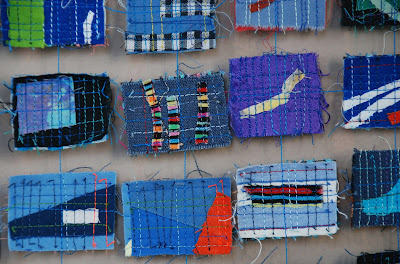 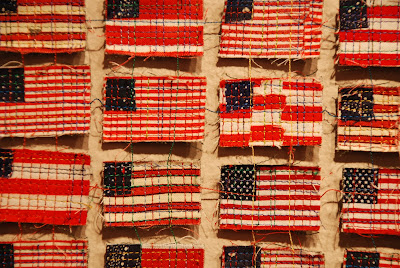 In the fourth quilt of the series I wondered what would happen if I allowed the postage stamps to cascade onto the floor and pile up at random in a 3-D effect. I’ve only seen it “installed” once, the day we took the photos. It’s never been out in public although it’s been entered a couple of times. 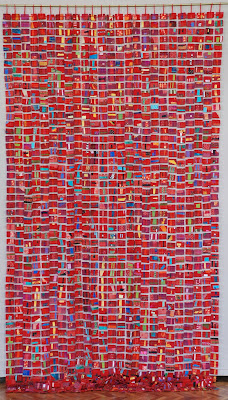 
In this new quilt I wondered what would happen if I allowed some holes to appear in the grid.  I started off by sewing my columns the same way I always had, trying to arrange the postage stamps at regular intervals. But as I kept sewing and sewing and sewing I had time to think about what I was doing, and decided it might be interesting to vary the spacing on the columns to put some irregularity in the grid. So I sewed some of the columns with the stamps closer together.

From the beginning I knew I wanted to leave some of the spaces open, so I cut little pieces of tissue paper the size of the postage stamps and inserted them into the grid as placeholders. By the time I finished sewing the quilt together, many months later, I realized this was a dumb idea – because now I have to tear the tissue paper away! I should have just left space rather than sewing across tissue paper. 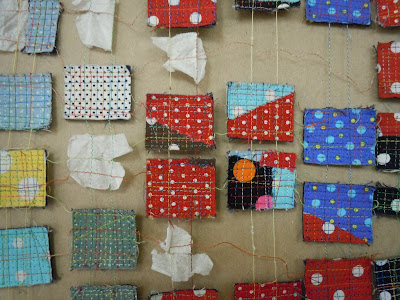 some of the tissue paper has been torn away, some is still there

Well, that’s the way you learn. Just like the Solvy, it seemed like a good idea at the time. Next time I’ll just eyeball it.

As this quilt was in process, I realized that the irregular grid might make for exciting design but it made for a flaming pain in the butt to sew together. Because the stamps weren’t aligned with one another horizontally, I couldn’t get my horizontal rows of stitching to go straight across. And in fact, as the errors compounded the farther I went, I realized that the quilt was not going to hang straight.

On four separate occasions, I had to hang the quilt up and inspect it. When I found places that were out of whack, I had to cut the stitching apart, let the columns hang free, mark where they should fit together, and restitch. Here’s a picture of the quilt hanging on the design wall on one of these inspection visits. My design wall wasn’t wide enough for the whole quilt, so I could spread out only about 18 inches at a given time. 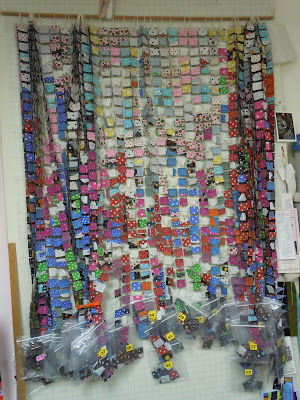 On each occasion, while I had the quilt hung up for inspection, I marked a horizontal line straight across with blue painter’s tape. That made it easier to align my columns for several rows of horizontal stitching, but despite my best efforts, the next time I would hang it up for inspection there were always bad spots that needed to be cut and restitched.

I typically go through a rollercoaster of emotions as I make a huge quilt. It starts out, of course, with wild enthusiasm – this is going to be the greatest quilt I’ve ever made. Then I get to the tedious middle part, and maybe even encounter technical difficulties, and start to doubt. By the time I approach the end I’m often ready to pitch the whole damn thing.

When I finished sewing on this quilt last Sunday I was (a) glad to be done and (b) seriously wondering whether it was worth having spent two months on. I hung it up on the wall again and started tearing the tissue paper away, which is going to take a l-o-n-g time. But after I got a fair amount torn away, I started feeling a little better about the quilt. I like the way the stitching lines go through space in the missing areas of the grid. I like the way the horizontal lines aren’t really horizontal. 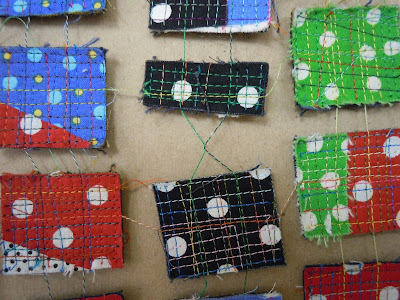 Despite my system improvements, this column got twisted before it got sewed in place with horizontal stitching.  I kind of like the look!  Maybe I'll incorporate it into a future postage stamp quilt.  Amd I'll let you know how I feel when Postage 5 is finally 100% done.
Posted by Kathleen Loomis at 6:51 AM