Many quilters have been nervously counting the days till October 4, the date for notification of acceptances and rejections to Quilt National '11. But we were surprised to receive the emails yesterday afternoon instead of next week. I'm very pleased to have gotten a yes, unhappy for several friends who got nos, and anticipating more of each reaction as I hear from other people.

I could identify a couple of the people on the list and stopped to call one of them with congratulations.  After we talked, I went back to my email to check out the details.  Oops!  The message had disappeared from my queue, replaced by a strange note that said "this message has been removed from the server."  We were mystified.  How can they come into your computer and snatch back a message that was already delivered? my husband wondered.  We had no idea.

I soon found out that similar problems had occurred with people who received rejection messages -- their emails also disappeared.  Other people were so confused by the infelicitously worded rejection that they sent emails to Athens saying was I really rejected??   I hope this is evidence that the space aliens have left my premises and moved on to wreak havoc in Athens and elsewhere.

I entered three quilts -- let's call them Blue, Red and Yellow/Green. I like Blue the best but thought Red had the best chance to get in. One of my friends thought Blue, but most of the people who have seen all three quilts in the flesh thought Yellow/Green would be the winner if any of them made it.

Yellow/Green was the one that I had the most doubts about in process, including the unnerving black spot crisis that I wrote about in August. There was even a moment of total irrationality about three weeks before the entry deadline in which I wondered if I could just throw Yellow/Green into a box somewhere and come up with a new piece for my third entry!

Well, you guessed it -- Yellow/Green got in. Which goes to show that you should always remove black spots from your quilts if possible, that your friends' judgment is often better than your own, and that you shouldn't try to change horses three weeks before the finish line. 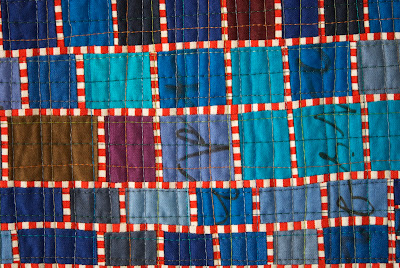 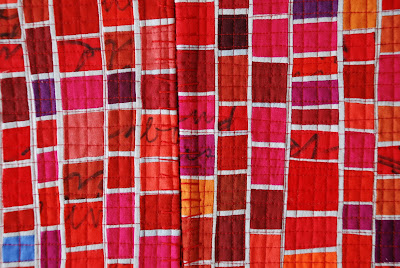 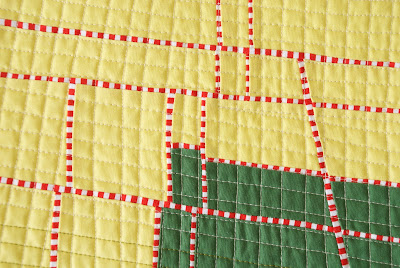