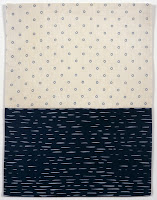 When I asked blog readers to comment last week on three fabric works, without knowing they were made by world-famous sculptor Louise Bourgeois, one person said she liked the design of the one shown here but “I don’t think it’s Quilt National worthy since it doesn’t present a mastery of any technique save fabric selection.” Another thought the pieces “show very little creativity and little technical ability.”

I had similar thoughts about technique when I looked at those particular three pieces, although other pieces that I showed images of in a subsequent post were more ambitious. Another blogger who saw the exhibit catalog, presumably with better photos, was impressed by the craftsmanship.

But that leads me to a more important consideration – what’s with technique and craftsmanship anyway? Is it essential to great art these days? Is it acceptable but not necessary? Or is it maybe even an impediment?

A couple of years ago a curator at a mainstream art museum was judge at a quilt art show. Some fellow quiltmakers and I had the opportunity to speak briefly with him and we asked him how craftsmanship entered into his deliberations. His answer: “not at all.” He said he was looking for ideas, not technique (which was clear from the fact that his best in show was minimal in the technique department).

We were shocked. General practice among quilt art shows is to hold craftsmanship quite high on the scale of virtues. I’ve heard many jurors and judges say things like “good technique won’t get you into the show in the absence of good design, but bad technique will get you out of the show all by itself.”

It’s common in the quilt art world to sneer at the Quilt Police, the mythical tradition-minded judges who can’t see beyond the number of stitches per inch and will reject a quilt, even if it’s spectacular, because the miters aren’t sewed shut on the corners. We sneer because we recognize that technique must serve design, and that sometimes it’s more appropriate to have three stitches per inch than twenty.

But I have personally believed that good technique should be the default, and if you choose to flout the “rules” you should have a reason. I don’t mind a quilt (or other fiber art piece – please forgive my non-inclusive language) that droops, frays, bulges or has non-sewn-shut miters, if I think the maker did it deliberately in the service of art rather than because she didn’t know how to do it the “right way.”

After my encounter with the curator/judge, however, I decided to think seriously about his position. I would try hard to divorce my evaluation of design and overall artistic worth from my evaluation of craftsmanship, and challenge my own assumptions about the worth of good technique. I was willing to consider that perhaps my own standards – ingrained since age 5 when my grandmothers taught me to sew and made me DO IT RIGHT – were a personal choice, not a universal value. I was willing to admit that while I was personally never going to make sloppy work, to use a nice pejorative shorthand, it was OK for other artists to be sloppy, just as it’s OK for some people to be Lutherans and others to be Wiccans, and we should tolerate each other’s choices.

I must report that my experiment in tolerance wasn’t totally successful. After a while I had to admit that I could not make myself totally open-minded about technique. I don’t know enough about other art mediums to give a good example, but in the realm of quilt art I still think, for instance, a 2-D piece ought to hang flat against the wall, have square corners and no visible thread ends unless it’s obvious the artist chose to do otherwise.

At the time I felt quite confident that my “prejudice,” if you want to call it that, was a good thing. Now I wonder whether that good-girl prejudice, shared by so many of us in the fiber art world, might be one reason we have a hard time leaving our comfortable little niche and crossing over into the wider world of just-plain-art. I will continue to think and write about this subject. Meanwhile, what do you think?
Posted by Kathleen Loomis at 11:18 AM