I have just learned that the San Jose Museum of Quilts & Textiles is going to exhibit the Marbaum Collection, the quilts assembled by Hilary and Marvin Fletcher. I am proud to have a quilt in that collection and thought I’d tell you a little bit of how it came to be.

If you’ve been in the quilt world for a while, you probably know Hilary Fletcher as the project director of Quilt National from 1982 until her death in 2006. She was the one who organized the jurying, sent out the acceptance and rejection letters, unpacked the quilts, hung them, arranged for the tours and did all the other chores that make QN the preeminent art venue in the world for quilts.

I had a quilt in QN ’03, one of a long series of quilts on letters of the alphabet that I was making at the time. It was constructed of selvages. When it came time to enter QN ’05, I sent in three more alphabet quilts, two of which were also made of selvages. This time I got a rejection letter, but Hilary had written in the margin by hand, “Do you have an F for sale? Or would you be interested in a commission?”

Well, there was never a sweeter rejection letter. I think having a quilt in Hilary’s collection is probably just as prestigious as getting into Quilt National, so of course I jumped at the offer. We negotiated entirely by email and it took much longer to decide what the quilt would look like than to make it.

The quilt had to be relatively small, tall and narrow to fit in a certain spot in the front hall. And of course it was to be an F for Fletcher. My first suggestions were freehand designs. 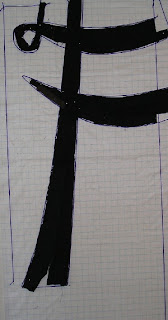 Since I hate to draw, I “sketch” on the design wall instead with pins and yarn. In the second sketch I filled in the strokes with selvages to help visualize. (I love this method of sketching, because it’s so easy to change your mind – just move the pins, hike the yarn up a bit, and take a new picture. And it’s easier for me to drape and nudge the yarn into nice curves than it is to draw the curves on paper.)

But Hilary and Marvin weren’t thrilled by either sketch. After some thinking time they decided maybe they’d like type instead of a freehand-drawn letter. Being a typophile, I was very happy to oblige, but then we spent a long time figuring out which typeface to use. I suggested my several favorite faces and Hilary chose her favorite of the bunch, but still wasn’t totally happy. She and Marvin scrolled through the faces available on their computer and came up with Ravie – how would that work?

My first thought, upon reading that email, was to jump off a cliff. Ravie is a horrible excuse for a typeface, that is, if you expect it to actually convey meaning to a reader. All my lifelong love of type had been tied to the concept that type was used for communication, and readability was its prime virtue. By that yardstick, Ravie flunks.

But fortunately I had learned at some point in adulthood that when your first inclination is to jump off a cliff, or tell somebody they’re wrong, wrong, wrong and here’s why, it’s usually a good idea to think about it for a while. And after I thought about it for a while, I realized that the capital F in Ravie was actually kind of cute. It didn’t even take all that long to figure out that it was an F!

So I wrote Hilary back and said sure, we could use Ravie. But then one of the Fletchers got cold feet and wondered if the classic typeface we’d discussed before might be better after all. How to decide??? This was stretching on and on and not fun any more.

I wrote Hilary again and noted that Ravie scored zero in readability, while the classic font scored high, but we weren’t actually in search of readability. A quilt made with the classic font would be more like a sign, while one made with Ravie would be more like a picture. That analogy struck a chord with both Hilary and Marvin, and they decided they wanted the picture.

So I made “Jaunty F” using Ravie, and it will be on display in San Jose from November 16 through January 20. My artist statement reads in part:
Ravie, the font chosen for this quilt, is classified as a "novelty" typeface -- one that you could never expect people to read at any length, but attractive as a design in itselt.  As a typographical purist who holds readability as the highest of virtues, I have rarely given the time of day to such typefaces.  But working on this quilt gave me a new appreciation for the exhilaration and fun of a letterform when it doesn't have to carry the weight of readability on its shoulders.  It can be jaunty indeed. 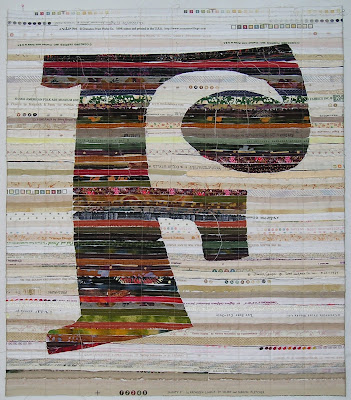 Jaunty F
Posted by Kathleen Loomis at 6:32 AM