I've just finished a book that is both challenging and disturbing to those of us who make art using cloth and similar stuff.  It's called "String Felt Thread: The Hierarchy of Art and Craft in American Art," by Elissa Auther.  As you can surmise from the title, it has to do with where things made of fiber fall in that hierarchy.  As you will probably not be surprised to hear, the answer is generally below the red line. 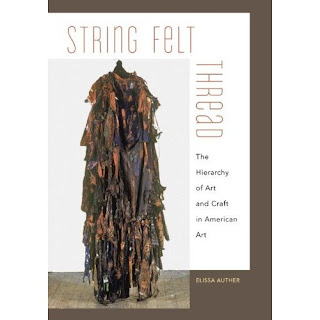 Auther focuses on three separate bodies of work or approaches that came at the issue from different directions during the 1960s and 70s, with different results.

"Fiber art" as a category didn't even exist until the 1950s and 60s when people trained as weavers started making new kinds of things that were not flat, not functional and often not made on looms, designed solely for display.  You may be familiar with some of the big names in this movement --Magdalena Abakanowicz, Lenore Tawney, Sheila Hicks, Ed Rossbach.

But this work, despite being shown at the Moseum of Modern Art and other top venues, never quite made it from "fiber art" to "art."  Critics had a hard time thinking of it as anything more than really good craft, but still craft and thus not art.  You'd puke to read some of the reviews, quoted by Auther, which patronize and denigrate the work not just for being made of fiber but for fiber's associations with women and domesticity.  Even reviewers who liked the work couldn't help but start off with snide remarks:

"Mops, floppiness and house-wifey dumpiness might distract the viewer, but only momentarily," one "positive" review began.  Another said, "Until recently, I always considered weaving a ladylike pursuit for frutrated housewives, but I am drastically changing my mind.  The best weavers are, to be sure, still women, but some of them are also first-rate artists."

At about the same time, another movement started to use fibers -- "process art," which Wikipedia describes:
The 'process' in process art refers to the process of the formation of art: the gathering, sorting, collating, associating, and patterning. Process art is concerned with the actual doing; art as a rite, ritual and performance. Process art often entails an inherent motivation, rationale, and intentionality. Therefore, art is viewed as a creative journey or process, rather than as a deliverable or end product.

The two movements came to the same place -- making art stuff out of fiber materials -- but from opposite directions.  The "fiber artists" started with fiber and wanted to be regarded as "artists," while the "process artists" started as "artists" and turned to fiber almost incidentally; they might as easily have turned to glass or rubber or dirt, and some did.  The difference lay not so much in the objects but in the aura, because the process artists were seen by critics as clearly on the art side of the art/craft line.

The fact that most of the process artists working in fiber happened to be men didn't hurt one bit.  The most prominent was Robert Morris.  About the only woman to be 100% secure in this canon was Eva Hesse, although her good name may stem more from her latex and fiberglass sculptures than from her work in cloth.  And Auther implies that process artists never did transfer their aura from themselves to the fiber; au contraire, the aura had to do exactly with making art out of dreck and the dreck remained dreck.

Finally, a third movement adopted fibers: feminist art.  These women decided to work in traditional techniques and mediums such as quilts and embroidery in a deliberate attempt to reclaim "women's work" from the cellar of critical regard.  Artists such as Miriam Schapiro, Judy Chicago and Faith Ringgold, who started as painters and sculptors, incorporated cloth and needlework into their art.  Significantly, these works rarely were exclusively made of cloth.  For instance, Schapiro made stretched paintings and collaged fabric on top; Ringgold painted onto unstretched canvas, then surrounded it with a fabric border (sewed up by her mom).

The feminist artists were critically regarded as "artists" and Auther believes that their work "revealed the hierarchy of media as an arbitrary construct that limited the definition of art.  In so doing, feminist artists, scholars, critics, and curators refused the 'taken for granted' status enjoyed by the hierarchy of art and craft since its inception...  Although it did not render the hierarchy of art and craft defunct, the women's art movement was ultimately more successful in expanding the category of art to include fiber because its agenda, not to mention its audience, far exceeded the provincial borders of the art world in the 1970s."

Auther has some provocative things to say about quilts as part of the feminist art movement, which I'll write about in another post.  Meanwhile, remember these tips: if you want to be a "real artist," start as a painter or sculptor, not a weaver, and it helps to be a guy.  Or die of a brain tumor at age 34, as did Eva (perhaps caused by the carcinogenic crap she used in making her work).
Posted by Kathleen Loomis at 7:57 AM