I've been invaded by aliens, who for the last two or three weeks have taken over my head, my body, my yard, my computer and my TV.  It hasn't been fun.  I wrote yesterday about the awful experience of temporarily losing 3,000 pictures into the void of cyberspace, but that wasn't the worst of the mischief the aliens had for me.  After some attempts to rescue my old computer, I decided to buy a new one, hoping that would solve my problems.

Yes, but how about all those new problems!  The new keyboard is configured differently from the old one, so I'm always hitting the wrong keys.  For the first several days, each time I tried to call up email I got a different program, and I don't seem to be able to make any of them work properly.  I still haven't got my internet favorites or my email address book onto the new machine, nor have I gotten all my recent work off the old machine.  I think I have all my old documents and pictures at hand, but I'm not sure (over the last six weeks I've gone to open many documents and found that the folders on my directory are actually empty).  I hate the new versions of Spider Solitaire and Free Cell, which is probably a blessing, and haven't yet found the program to install the ancient CivNet game that I love.

It's both surprising and pathetic how computer problems can spoil your whole outlook on life.  I have every reason to be cheerful and productive, having recently finished up a bunch of good art and been accepted into a good show, not to mention getting a beautiful new sewing machine.  I have lots of ideas for what to work on next.  But at night, instead of sleeping or thinking about new art, I've spent way too much time stewing over whether I will be able to find the manuscript for my book or reconstruct my Christmas card mailing list and why didn't I just print the @#%*@ things out on paper.

I've tried to keep up with my blogs but this too has been frustrating.  For a while if I wanted to post pictures from my overseas trips I had to do so from my husband's computer, but to download and post new pictures I worked on my own computer, unless, that is, I had to crop an image, which meant I had to email it to the other computer.  Sometimes I would go back and forth between the two computers three or four times in the course of getting a single blog post ready.  No wonder I haven't posted anything worthwhile in weeks.

Usually it is a pleasant respite from stress to disappear into my studio, turn on trash TV or the opera and sew.  But last month the aliens brought us a new satellite TV system, including the first DVR ever in the Loomis household, with hardly any directions on how to use it.  When I try to record a program it uses my husband's TV set to do so, meaning he can't watch his program.  I tiptoe through the directions, checking and rechecking every button I push, choose "TV2", see it sitting right there on the screen, press the button -- and there's the schedule with my program being recorded on "TV1", and it won't let me delete the order.  Can't seem to find a timer to automatically switch over from the music to a program at the appointed hour, so I'm missing the first three minutes of many of the shows I try to watch.

So I'm being nibbled to death by space alien ducks, plus a sinus infection.  Plus the hottest summer on record, and the worst drought in decades; we've lost at least four of the new rhododendrons planted this spring.  But I will not despair.  September is over.  It's starting to get a bit cooler, I'm almost through my ten days of amoxycillin, and I have been doing some sewing!!

Last winter I started a new postage stamp quilt, made all the little pieces, got all the columns sewed together and packaged them for the last push of sewing across the rows.   When I decided to make pieced quilts for my Quilt National entry, I put all the packages into boxes and stored them on the bookcase, where they have been smiling at me for eight months.  Last week I pulled them out again and started sewing.  I'll tell you more about that process in another post. 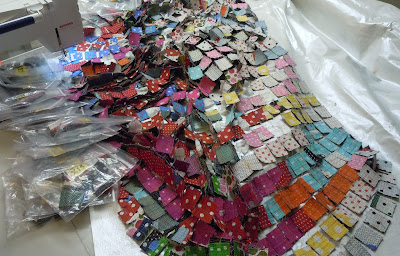 Posted by Kathleen Loomis at 3:13 PM