I hate Halloween with a passion and haven't worn a costume in 50 years. But I volunteer every week with abused children ages 5-10 and was told that I HAD to wear a costume to the party tonight. There is no force on earth other than these little kids who could make me put on a costume, but I succumbed.  Problem is, I didn't know what to wear.  So last night I put out a desperate cry for help to my 3,000 closest friends on the Quiltart email list.

I thought it needed to be an outfit that I could say "I am a _____" rather than just some weird clothes that don't match. And I didn't want to have to go out and buy anything.

Seven minutes after I posted my call for help the responses started flowing.  Dozens of people wrote in with ideas -- that's what I love about this list; they're so willing to help in one's hour of need.

If I'd counted votes, I would have dressed as a gypsy.  Several people thought, rightly, that it wouldn't be too difficult for a not-young, not-thin woman to come up with some flowing skirts, scarves and jewelry and look not-too-awful.  And I could have, had I owned something that could pass for a crystal ball and had I not engaged in denial and put off wardrobe planning until about a half hour before I had to leave.  Others suggested Mother Goose, with apron and gathered cap.

Many of my correspondents recalled clever costumes they'd used in the past.

Jennifer Martin wrote, "One year I went as the laundry fairy. I wore regular clothes and pinned missing socks all over myself. I also wore a cheap $5 tiara and carried a cheap wand. I also carried my stuff that day in a laundry basket instead of my regular tote bag."

Patricia Cox: "I sewed a stuffed doggie to the edge of my pant leg, added a collar and leash and went as a dog walker. As I walked it looked like the dog was chewing off my pant leg."

Cynthia Wenslow:  "I went as the Spirit of Autumn. I wore a dark green pant suit and cut out a zillion leaf shapes from colored construction and copy paper and taped them all over my pants and jacket and hair with painter's tape doubled over on the back. Some eventually fell off during the course of the evening, but I just told everyone it was only natural that leaves fall in autumn!"

Helen Howes:  "I drew two red dots on my neck and went as the Vampire's Victim."

Janet Windsor:  "Jeans & sweatshirt with socks and underwear spray basted on -- Static Cling; and the ultimate -- I wore whatever I wanted and went as a Party-Pooper!"

Much as I appreciated the wit of these costumes, I was afraid it would go over the heads of the six-year-olds.  And much as I empathized with Janet's final suggestion I knew I had to do something.  My solution was to be a fairy godmother.  Some of the Quiltart people had suggested that, with creative embellishments  such as velvet capes, chiffon scarves and crowns.  In the end, in keeping with my aversion to costumes, I went with the absolute minimum: long skirt, high heels, Mardi Gras beads, a headdress and of course a magic wand.

The headdress was a length of tulle tied in a knot around my head and embellished with iridescent curly ribbon.  The magic wand was a dowel, a cardboard star covered in aluminum foil, and more curly ribbon.  Total prep time: 20 minutes. 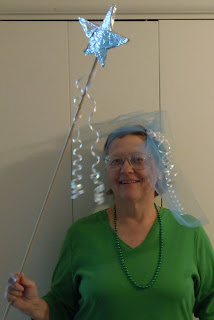 So how did this getup go over with the kids?  Within one minute of walking onto the premises, one of the little girls had grabbed the wand, pulled the ribbon off the star, torn the aluminum foil and reattached the ribbons halfway down the handle.  I did manage to keep the headdress on for a half hour, after which the little girls took turns wearing it and waving the wand.  The Mardi Gras beads never did resurface after somebody took them off my neck.  It was a huge success and required no explanation -- apparently every child over age two knows what a magic wand is and that somebody carrying one is a fairy godmother.  Next week I'm going to bring 10 yards of pink tulle and my iridescent curly ribbon and make headdresses for everybody.

So, a wonderful heart-tugging evening -- full of love for my Quiltart colleagues and these adorable children who have been dealt a bad hand but are hanging in there.  My life is so enriched by spending time with them on my lap.  Next year maybe I'll go as a gypsy.
Posted by Kathleen Loomis at 10:41 PM