I’ve embarked on a train of thought this week that started with a discussion of Quilting Arts magazine. (Earlier posts here and here, or just scroll down and read the last two essays in between the pictures.) Several of the commenters to yesterday's post raised questions that propel my train farther down the track.

Diane wrote, in part, “I get your concern that it's all too easy to be diverted from focus on art by the appeal of new gadgets and techniques. But you seem to forget that what might be distracting to you might be exactly what someone else needs to take her art in the direction she wants. Maybe that new technique is exactly the way she can put her artistic vision onto fabric.”

Diane, I think your comments reflect on the state of “art quilts” today. That heading encompasses people everywhere from serious artists to total newbies.

It’s like a pyramid. At the bottom are a lot of people who don’t even think in terms of artistic vision or taking their art in a certain direction; they’re happy just to make nice things. As Leigh put it, “I strongly suspect that most people don’t have any ideas they are looking to express. They just want to have the latest and greatest and make a Cute Project for their friends to tell them how ‘Creative’ they are.”

These are the people who buy patterns, make quilts described in magazines and books, enjoy a different kind of technique and project every month, and buy the new toys and products. They may say they’re interested in “art quilts,” but in practice, there’s a lot of quilt and not very much art. These people pay the bills for the huge quilting industry, which to a degree supports the habit for all of us. It’s this huge audience that publishers have to cater to, if they want to stay in business.

At the tip of the pyramid are serious artists who may or may not earn a living from their work, but certainly approach it like a business, working hard and trying to make the best possible art they can. This small audience is one that publishers cannot afford to cater to. There just aren’t enough of us to buy the magazines and books that we like.

In the middle, however, are a lot of people in transition. They may have entered the art quilt world as beginners, but now they are wanting to progress toward more original and creative ways of working. If they’re lucky, they’ll find a good teacher who can help them find their sea legs and move ahead. But many will look toward books and magazines, especially Quilting Arts, for guidance. 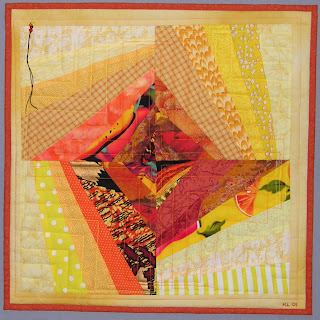 Here's a cute little quilt I made before I knew there was such as thing as artistic vision.  You can learn how to make it too, from a really good book.

And this is where I have concerns about the technique- and product-oriented focus of some magazines -- it’s so easy to keep thinking about technique and never get around to the design and meaning. Does this act as an enabler, subtly encouraging people to stay on the lower levels of the pyramid, making a new nice thing every month, instead of urging them to move upward and develop their artistic vision through focus?

Yes, a new technique can often energize and transform somebody’s whole work, and that holds true both for hobbyists and serious artists. That’s exciting when it happens but it also implies the discipline to stick with the new technique and make it your own. My fear about magazines with a new technique every month is that people will fall in love again next month and never get to master the one they loved last month. Maybe what I’m saying – and several of the people who commented yesterday had the same idea -- is that people who want to move up the pyramid should read Quilting Arts as eye candy, but for their own good, resolve to actually use only one new idea a year, if that.

Posted by Kathleen Loomis at 8:51 PM