We hear a lot of hoohah about how photography is so important in getting our work into shows.  I generally agree, and will credit my wonderful photographer George Plager whenever possible.  But for this particular show, I had to do it myself.  I finished the piece less than 24 hours before I had to get on a plane and there was no time for professionalism.

I probably should have given up after five minutes with the camera.  My piece was so wispy that the autofocus on my point-and-shoot camera apparently couldn't find anything to grab onto, so it was a bit out of focus.  I wasn't proud of this photo.  On the other hand, when trying to photograph something this insubstantial, I think even George or Ansel Adams would have been challenged. 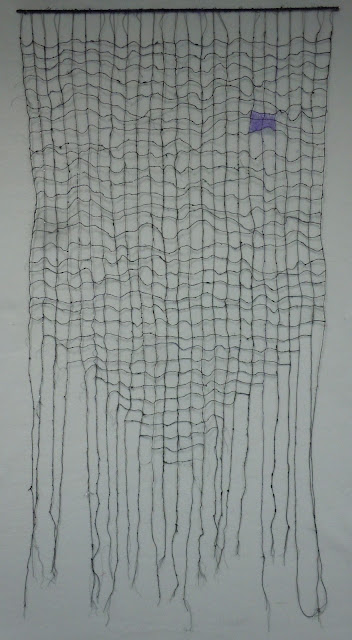 My only hope was the detail shot, and that came out beautifully. 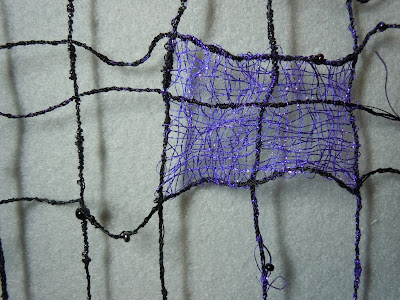 The good news is that the work was chosen for the show anyway.  Fortunately for me, the jurying wasn't done as in Quilt National, where apparently full views are all the jurors see in the first several rounds.

The piece, Gridwork 1: Purple Heart is on display in Textiles in a Tube, at Greenville Technical College, Greenville SC, through April 15.  The exhibit had a gimmick: all work had to arrive in a 3" x 36" tube.  Terry Jarrard-Dimond, who was the juror, has written about the show on her blog and has photos of the best in show.

I was pleased with this piece.  It's the first in a series that I call Gridwork.  I see these as a logical extension of my postage stamp quilts, where little bits of fabric are held together in a stitched grid.  My latest postage quilt experimented with omitting some of the bits of fabric, allowing large expanses of the grid stitching to exist alone in space.  Now the gridwork series omits all of the bits of fabric, leaving only the grid.

This piece was constructed using the sewed cord technique I wrote about last year.  The "purple heart" segment was darned in by hand.  At first I thought I would weave an even surface with over-under-over-under threads.  But the metallic thread had a life of its own and wouldn't lie flat to be woven into, so the threads are going every which way.  As with so many aspects of art and life, Plan B turned out to be a lot better than Plan A probably would have been.
Posted by Kathleen Loomis at 6:51 AM