The big conversation on the Quiltart list yesterday had to do with Quilting Arts magazine and its spinoff TV show, and whether the “arts” part of the title is still applicable.

Somebody watched a show and was unhappy at its emphasis on perfect piecing and pressing, and its choice of sappy projects. “So where did this milk toast concept of ART come from? Where did the ART magazine and technique show go to? I am so disappointed,” she wrote.

I had to agree, and my contribution to the discussion was to observe that apparently the economic realities of the publishing business dictate that you must go to the lowest common denominator in order to sell magazines and ads. In the little ballpark of quilting, the l.c.d. is that people want to say they're making "art quilts" but don't have the knowledge or mindset to actually do so. Instead they learn techniques, buy products, follow directions, and think they're doing something worthwhile.

And maybe they are!  Depending on your level of expertise and aspiration, making a project as described in Quilting Arts magazine might be just what the doctor ordered. It might teach you something new, stretch your imagination, and give you a well-deserved feeling of accomplishment.  Thousands of quilters seem to find this magazine, and this approach, appealing.  But (back to the original complainer) it probably isn't art, in the sense that it isn't very ambitious and may not be very original, and it doesn't do much for serious fiber artists.

I suggested that there just isn't enough market interest in serious fiber art to support a lovely, glossy magazine like Quilting Arts, or TV shows or even books. I should have pointed out that we do have Fiberarts magazine, and Surface Design, the magazine of the Surface Design Association, both of which set their sights higher.

We probably have to give up on TV for getting any artistic inspiration. Even mainstream art, with its much greater constituency, struggles to show up on TV without being dumbed down, gimmicked up or presented as an afterthought to biography. A year or two ago I was visiting two artist friends when a made-for-TV movie about Georgia O’Keeffe came on. We all trooped in to watch it, but gave up in less than an hour; it was so heavy on sex and so clueless on art that we couldn’t stand it.

Books, which used to be the specialized refuge of the total nerd, have also gotten caught up in the competitive jungle of the marketplace. My own library is full of interesting and inspiring books featuring prominent artist/quiltmakers, their works and their thoughts – all bought in the previous century. Many of them were bought locally, or from a vendor at a big quilt show. 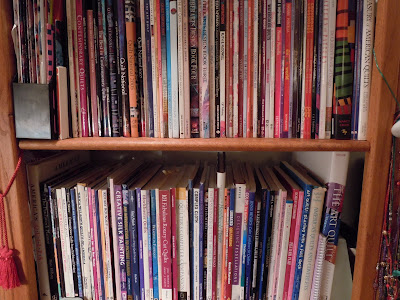 Today apparently the popular quilt publishers won’t touch a book unless it has patterns. You may be able to find the occasional book with higher aspirations – Joan Schulze’s self-published book from last year and Nancy Crow’s 2006 book are excellent examples – but neither came from a “quilt publisher” and I suspect neither will be found at your local quilt shop.

So what’s a serious fiber artist going to read? As I mentioned, I like Fiberarts and Surface Design. I like the catalogs from major shows like Quilt National and Visions. I own some of the technical bibles on surface design. But beyond that, I find that mainstream art magazines and books contribute more to my artistic development than any of the “quilt art” publications.

Posted by Kathleen Loomis at 1:43 PM