I've been reading "The Art Fabric: Mainstream,"a survey of the first decades of fiber art by Mildred Constantine and Jack Lenor Larsen, written in 1980.  Having come to fiber art via quilting, I was eager to see what they had to say about quilts.  Perhaps you would like to see it too.  I can give it to you in its entirety, five whole sentences:

"The enormous, widespread admiration for 18th and 19th century quilts and the popularity of architectural banners have sponsored a broadside of contemporary patchworks.  For some reason, few satisfy more than a decorative function and many not even that.  The pattern is on them.  Often there is no craft and no love in them, only an all too easily comprehended facility.  Pity."

My first reaction was a mixture of shock (wow, that was cold!!) and defensiveness (come on, it couldn't have been THAT bad!).  But then I realized that quilts as art were just barely coming on the scene when Constantine and Larsen wrote this book.  The first Quilt National was held in 1979, organized precisely because the first generation of quilt artists were so frustrated at their non-existence in the mainstream art world.  You might be interested in reading comments from one of the jurors for that first show.  You can look at all the quilts here.

When I went through that gallery, I had to admit that if the QN '79 works were representative of the best of quilted artwork, the withering dismissal might not be that far off the mark.  Nancy Crow, Francoise Barnes and Michael James had signature works in that show, pieces that you have seen reproduced a hundred times, and though they look somewhat dated to us now, I think they qualify as art.  I found two other pieces that look contemporary even now: 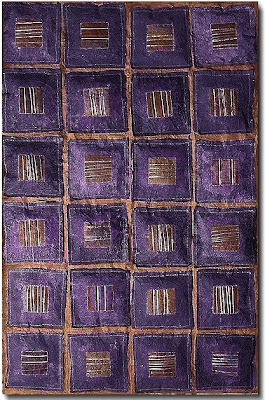 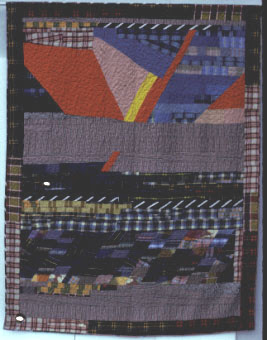 
But the rest of the pieces in Quilt National arguably would have looked kind of like country cousins next to the other fiber works illustrated in the book.  I'm not sure you could say they had "no craft and no love in them," but I'm not sure you could say they had much art in them either.  Most were riffs on traditional quilt patterns or quilt approaches: block-to-block design, pictorial folk-art scenes, phototransfers.  They were highly influential in the quilt world -- you can see their fraternal twins at every quilt show in the US today -- but had no impact on the art world.

I think and hope quilts have come a long way toward art since those days.  It's no fun being the country cousin and getting dissed in books that are so heavy you could get a concussion if they dropped on your head.