The in colors for spring

When I taught workshops last week for the Contemporary Quilt and Fiber Artists in Cincinnati, I asked people to bring Kona cotton so we could swap colors and have the fabrics stitch up nicely together.  So I know I gave them a limited palette of fabrics to start from.  Still, when I dropped in at the Hobby Lobby in Cincinnati the day before the workshop to augment my own stash, there were at least 35 colors to choose from.

What actually happened: a couple of colors were wildly popular and others totally absent from the workshop.

Purple and green were the big winners in this popularity contest, showing up in several quilts.  But only green made it to the fashion show at the guild meeting.  I counted a dozen people wearing green of various hues, including myself.  Only one or two people wore true greens; everybody else went toward the yellow side of the spectrum. 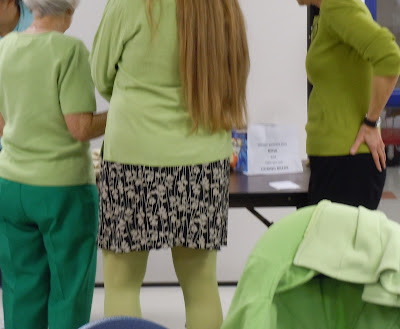 But the big surprise to me was that pink made such a big splash at the party -- and apparently had such a good time that it came again two days later.

Separated at birth 1: two different workshops, almost the same color combination  (three pinks as the original colors, plus dark gray as a neutral and lime green as an accent) 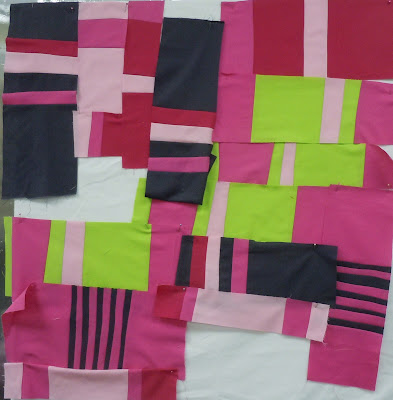 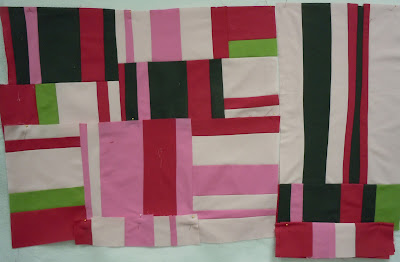 Separated at birth 2: two different workshops, almost the same color combination  (black, white and gray as the original colors; plus pink and green as accent colors) 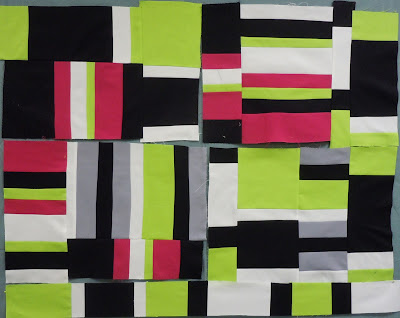 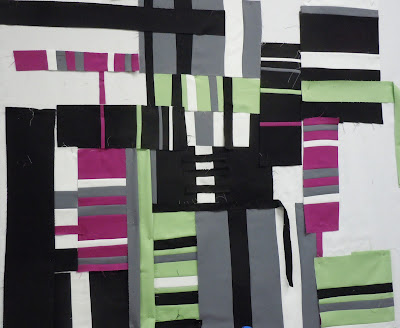 It's also surprising to me that in the first pair of separated-at-birth twins, the "recipe" yielded two quilts with very similar personae.  But in the second pair, the character is very different, thanks to a warm pink vs. a cool pink, and a clear yellow-green vs. a grayed blue-green.

Color is always amazing, which I'm sure is one reason we all stick with art!
Posted by Kathleen Loomis at 11:00 AM