I had the pleasure of visiting with Contemporary Quilt and Fiber Artists in Cincinnati earlier this week, teaching two workshops and speaking at the monthly meeting.  The workshops were on improvisational strip piecing, in which you begin by making several panels of related fabrics, then slice them into pieces and arrange them into a composition.

Each participant was asked to bring three one-yard pieces, a light, a medium and a dark, in colors that seemed to go well together.  The first three panels were made from just these three fabrics, with each color predominant in one of the panels. 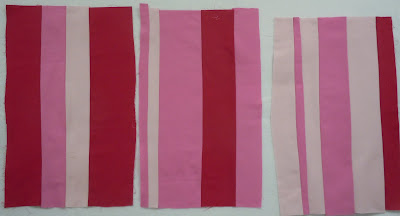 For the fourth panel, we introduced a neutral, from a stash I had brought along.  I was surprised at how many participants included neutrals in their original three; I had thought people would feel more colorful!  (Perhaps they bought their fabrics when it was still winter.)  So instead of introducing a neutral, some people chose another color for that panel.

For the fifth panel, we introduced an accent color.  Each person cut a six-inch strip from each of her three fabrics and put them into a swap pile, along with some I had brought.  (Everybody was using the same fabric so the swaps didn't create problems of having a different hand.)  A couple of the colors were popular but no fights broke out for sole possession. 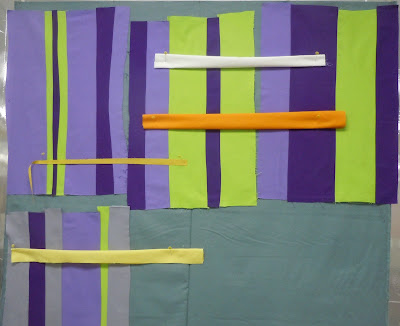 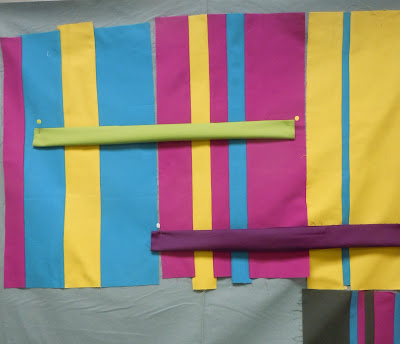 An important part of the workshop was auditioning colors to add to the composition.  Some people went to the swap pile, grabbed one fabric and were sure that was the one.  I counseled that you shouldn't marry the first guy you date and encouraged them to try some others.  Some people stuck with their first choice but many changed their minds when they looked at alternatives. 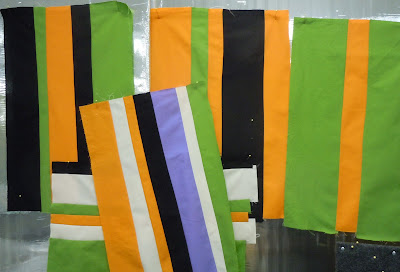 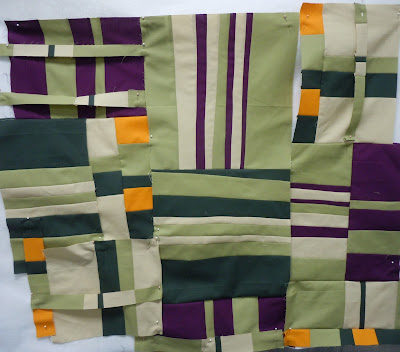 The orange with its original owner, and as somebody else's accent color. 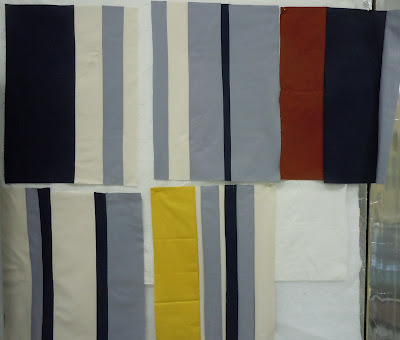 Five panels; when you start with three neutrals, you get to add two real colors.

At the first workshop, only one person finished sewing her top together before we adjourned for the day.  We asked people to bring their work, even if it was in pieces, to the guild meeting the next evening for show and tell.

I was amazed -- 27 hours later, practically everybody at the workshop had finished her quilt top! 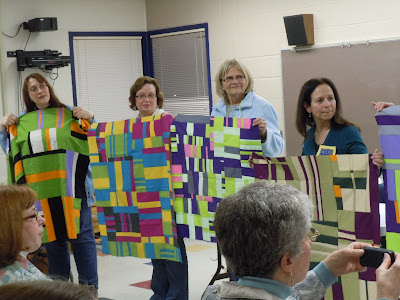 Posted by Kathleen Loomis at 6:58 AM