Although I go to museums and galleries whenever I can, you would never accuse me of being knowledgeable about the Art World.  But I do try to remedy that situation by reading some art magazines and newspaper reviews.  I'm always interested in what they have to say about "craft," (as opposed to "art") and particularly what they have to say about fiber.  But sometimes it's not easy to figure out what they mean.

Yesterday morning I was looking at the latest issue of  "Art in America" and read a review of a show at the Museum of Arts and Design in New York.  Before the critic got to talking about the show, he paused to slam the museum for having changed its name nine years ago; it used to be the American Craft Museum.

"...the timing of the decision to leave craft behind could not have been worse," he wrote.  "In the past decade, manual skills have become red-hot intellectual property, drawing unprecedented attention from artists, designers, activists, environmentalists and scholars.  Who knows what benefits might have come to the museum, had it continued to stand proudly for the complex, contradictory values of the handmade."

Reading that was pretty cheering; it made me want to put down the magazine, get out of bed, go to my studio and make some red-hot, complex, contradictory, handmade art!  (Even though I had to wonder how exactly this red-hot critical focus is manifesting itself, and why all the fiber people I know are somehow missing the boat.)

That evening, exhilarated by my red-hot day in the studio, I was reading the New York Times art pages, and found a review of another show, this one called "Unpainted Paintings."  The gimmick is that the artists used stuff other than paint to make their artworks -- Kool-Aid, fire, nails, buttons and foil were among the stuff mentioned. 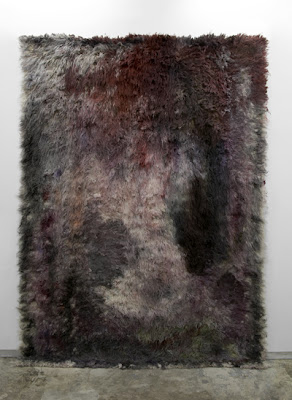 How nice, I thought, to see this artist's work described favorably, with no patronizing adjectives or putdowns, so frequently found when "mainstream" critics talk about fiber work.  But then I read the rest of the paragraph:

"The show also brings one — but only one — artist in from the cold of the so-called craft world: the internationally known fiber artist Sheila Hicks, although she is represented by a piece resembling fancy upholstery that is far from her best."

OK, if a critic wants to not like a piece on display, that's her privilege, and I won't take offense on behalf of fiber artists.  But what's with the remark about coming in from the cold?  Who besides art critics so-calls the so-called craft world?  Why is Sheila Hicks snarked for making fiber and Anna Betbeze isn't?  Or is Sheila Hicks being snarked not for what she made, but because the critic and/or the Art World have labeled her as a resident of the Craft World?  And if so, whose fault is that???

And if craft is such damn red-hot intellectual property, why snark at all?

I'm confused.  To heck with the studio -- maybe I'll just go back to bed and read magazines.
Posted by Kathleen Loomis at 7:44 AM