When I visited Tokyo last summer I walked for many miles through the city.  As I headed out on my first walk, I was somewhat concerned about getting lost.  Although big streets are signed in both Japanese and English, small streets may not have signs in either language, and my map had names for only the major arterials.  I knew I would have to stay alert and keep track of my turns to find my way back to the hotel.

But my apprehension lasted only a few minutes, because a half block down the street I came upon a detailed sign showing every street in the neighborhood.  And every block or so on, I came upon another sign where I could check my progress, even without knowing the language.  As a lover of maps, I was intrigued to notice that each one was oriented to the viewer.  For instance, if this particular sign had been affixed to the wall behind me instead of on a post overlooking the canal, so that I would have had my back to the canal while reading the sign, the canal would have appeared below the street instead of above it.  So at a single intersection, there might be two or three different maps, depending on the direction in which people would look at them. 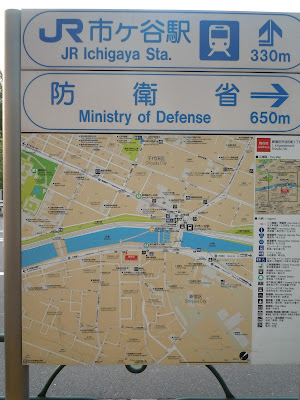 Later in my trip I commented to a new Japanese friend that I had been so impressed by the maps, and thought this had to be the most pedestrian-friendly city in the world.  He was happy to accept the compliment, but told me that the maps aren't there to be nice to tourists -- they're there as civil defense against earthquakes.

The red rectangle on the map shows the local shelter, where you would go posthaste in a quake.  That's why they're so user-friendly -- when the big one comes, you don't want to have to be thinking which way to run.  If it's to the left on the sign, you turn left and make tracks.

And the maps are particularly frequent along the canals in downtown Tokyo, remnants of a moat that once encircled the Imperial Palace.  As we all know from watching footage from Japan yesterday, tsunamis can engulf even the most innocuous creek or river, and the authorities want to get pedestrians away from that water as quickly as possible.

I was happy that the maps were there to guide my early morning strolls last year.  I hope they didn't have to save people from being swept away yesterday.
Posted by Kathleen Loomis at 7:12 AM