This is the first year the International Quilt Festival has held its spring show in Cincinnati.  For eight years its venue has been Chicago, strategically scheduled shortly before the big and competing quilt show in Paducah.  Sure enough, the new incarnation of the show is three weeks before Paducah, no doubt in hopes that midwest quilters will prefer a springtime trip to Ohio rather than into the wilds of western Kentucky.

It's been several years since I visited one of the blockbuster quilt shows and I was looking forward to it.  Although I don't think my own work is well suited to the judged shows at either Houston or Paducah any more, I like to observe the trends.  But the Cincinnati show is a little different because there are hardly any judged entries.  The great majority of the quilts on view are in special touring exhibits organized by others.  As a result, I think the overall quality was higher than you will find at Houston or Paducah.

In fact, the quilt-loving visitor from Mars might have thought that this show was sponsored by Studio Art Quilt Associates.  SAQA had a huge section with two separate exhibits: "Sightlines" and "Creative Force 2010" which contained many of the best quilts in the building.  I'm sorry that SAQA's no-photos policy prevents me from showing any to you.  I understand that they want to sell catalogs but still think it's penny-wise, pound-foolish to ban pictures.  Who knows, if I were to post a couple of the best ones on my blog, you folks out there in cyberspace might all want to buy catalogs to see the rest of them.

When I visit a quilt show I like to set myself a task in advance; it sharpens my attention to what I'm seeing.  This time my task was to find representational/pictorial quilts that I thought were successful as art, not just sentimental and pretty.  I've always thought that fabric is not a medium particularly well suited to making pictures.  Even though pictorial quilts are popular with quilters and viewers, I think they contribute to the low regard with which quilts are held by the mainstream art world.  But I know every generalization has its exceptions, and that's what I was in search of.

I had most success in the "Tactile Architecture" exhibit, which by definition leans heavily toward the representational.  Although some of the quilts in this section were kitschy, including one gag-inspiring depiction of an outhouse, complete with patterned toilet paper, I found several that I thought were successful as art.  None attempted to reproduce a photograph, but took some artistic liberties with perspective and color that made the work more interesting.

Probably my favorite was called "Marilyn," a witty reference to the famous Andy Warhol silkscreens that arrayed multiple images in different colors into a single work.  Here, instead of a movie star, we get a water tower. 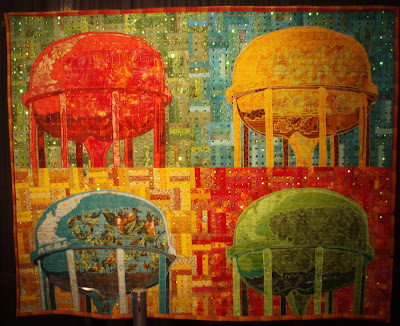 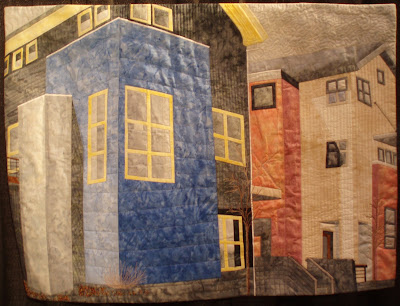 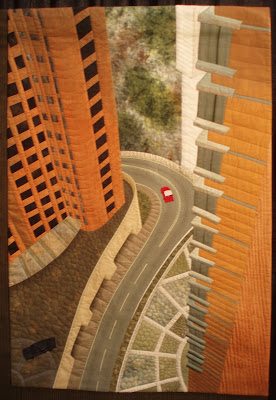 Posted by Kathleen Loomis at 11:20 AM