I was disappointed in one big respect at the quilt show -- couldn't find most of the things I wanted to buy.  Top on my priority list was a new pair of tweezers.  I think they're the greatest sewing tool you can use, helping hold down and guide fabric under the needle, as well as pulling threads and picking up things too tiny to get efficiently with your fingers.  I've been looking forward to this show for months, planning to treat myself to two or three new pairs to replace one that has gone AWOL and have one in reserve.

I always bought tweezers at the big quilt shows, from a guy who would have three booths worth of space and hundreds of different sizes and shapes of scissors and tweezers laid out on long tables.  When I mention this to other quilters, most of them say "oh sure, I know who you're talking about."   But whoever he is, he wasn't in Cincinnati last week.

Then I thought maybe I would stock up on Isacord thread for quilting.  I love it, or more accurately, my sewing machine loves it.  When other threads misbehave, Isacord always does the job, no matter how tricky the fabric or how thick the quilt sandwich.  I just finished quilting a big piece that exhausted my favorite red, and the sewing shop that used to be within walking distance has moved several miles away so it's a bigger deal to replenish my supply.  Nope, no Isacord in Cincinnati -- also no Aurifil, my favorite piecing thread, and hardly any other thread vendors.

I'm always on the lookout for striped fabric, thinking I might make another large quilt like my "Crazed 8: Incarceration."  But though I eyeballed every array of fat quarters in the convention center, I couldn't find stripes, which apparently have been obsolete for the last several years.  Will I live long enough for the pendulum of fashion to swing back?

In the end, this is all I found to buy: a new pair of Machingers, gloves with rubber fingertips that really do make it lots easier to guide a quilt under the needle; two packs of embroidery needles, and a couple of boxes of IBC glass head pins from Clotilde.  The pins are the greatest on the planet but very hard to find in stores. 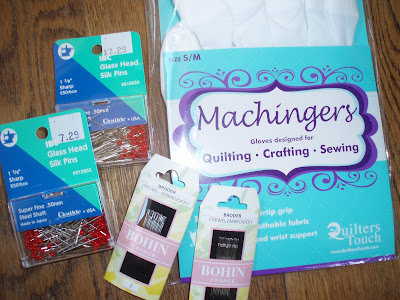 No fabric, no thread, no books (the vendors that used to have boxes and boxes of them have either gone out of business or switched their inventory to other products).  No doodads or sewing machine accessories, although I sure would like one of those $4500 Sweet Sixteen sit-down longarm setups.

I was the show promoter's worst nightmare, the visitor who didn't buy much stuff.  But it wasn't my fault -- bring back the Tweezers Guy!!!
Posted by Kathleen Loomis at 7:05 PM