The modest triumph of the leftovers

More than a year ago I participated in a group project in which several people sent around a composition on fabric, each one adding, subtracting and/or rearranging the elements from the previous people in the chain.  Many of us put in a little extra fabric as we sent the project along, in case somebody wanted to use more of a previous color, and anything that had been subtracted from the composition still went along with the package.

When the project was over, I inherited the leftover bits and sewed them together into two small quilt tops.  I showed them on my blog last spring and quite frankly didn't think either of them was a work of art.  I love to sew leftover bits together and making the two small tops was a good engine-starter for me after a fallow period; the project was relatively mindless but it did get me into the studio every day and by the time I finished, I was revved up for "real" work.

The tops were pinned to a piece of board in my studio that I use as a design wall, but other boards got propped up in front of it and for more than a year I pretty much forgot they were there.  A couple of weeks ago I was in search of an empty board for a new project and what did I find but one of the forgotten tops.  At first I hadn't planned to even quilt it; it seemed like a minimal piece of work.  But a year of absence made my heart grow fonder.  As it happened I had just finished quilting a large project, had leftover batting and backing still out on my work table, and it seemed like a good idea to use it to finish my formerly forgotten top. 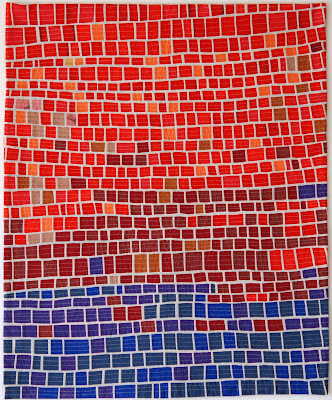 I realized as I quilted that although the piece was small and simple, it was important to my body of work for a couple of reasons. 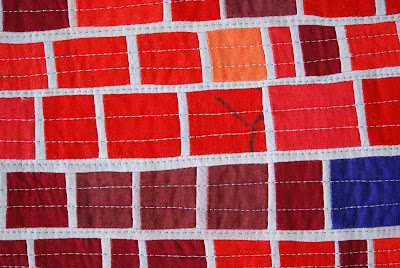 First, take a look at this detail shot.  You will notice that one of the small bits of fabric has marks on it.  That's because one of the participants in the group project drew on her fabric, and I decided to use those leftovers along with everything else in the package.  When I saw the marked fabric sewed up, I wasn't sure I liked it, but then decided that it gave energy and mystery to the quilt.

When I moved on to "real" work I decided to use the same approach, writing on my fabric before I cut and pieced it. Here's a detail shot of one of my subsequent large works; you can see how it was influenced by the leftovers quilt. 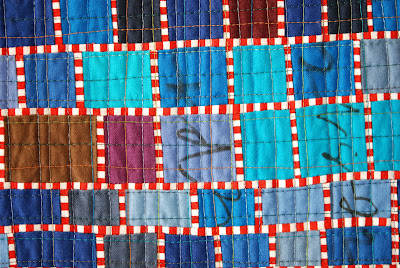 Another reason why the leftovers quilt was important was that even though it is only three colors -- red, blue and brown -- it has many different shades of those three colors.  Seems that everybody who contributed red to the project had a different one!  I liked the tension and excitement of the very close contrast, and when I moved on to "real" work I used the same approach.  When my local fabric store didn't produce enough different reds, I sent away for every shade of red and blue Kona that Robert Kaufman makes, and my large works had the same monochrome-but-different flavor of the little quilt.

Finally, I probably wouldn't have used brown, my least favorite color, as the mediator between red and blue if left to my own devices.  But the presence of several different browns in my package of leftovers made me use them, and I liked what happened.  I used brown again with both red and blue in the "real" works that I made later. 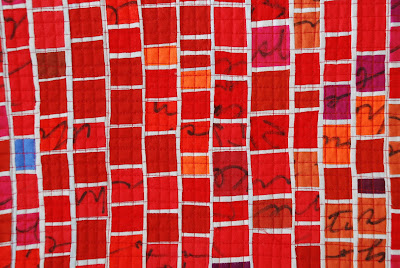 The moral of the story, apparently, is that even a project that seems minimal and mindless can give you ideas that graduate into maximal and important works.  When I realized the virtues of this modest little quilt, I decided it not only deserved to be quilted up, but maybe even go out in public, to the right modest little venue.

By the way, I hope you will understand if I give you only details of the two large "real" quilts.  They are finished, and I entered them in Quilt National last fall but they were not accepted.  Because of the virginity rules in some major quilt shows, I've decided to keep them off the website for now, in case I want to enter them in a show with restrictive requirements.  With any luck, they'll find a date someday and get to come out of the closet.

In keeping with my penchant for naming quilts in my Crazed series for disasters and things out of control, I decided to call this one "Groupthink" in honor of my collaborators.  Usually groupthink turns out pretty bad, but in this case it delivered all kinds of benefits to my doorstep.  Thanks again to all whose bits of fabric ended up in this quilt.
Posted by Kathleen Loomis at 10:56 PM