I wrote a couple of weeks ago about how my camera suddenly developed a distressing ailment -- its eyelids failed to retract fully.  If you didn't mind a black triangle over one corner of your photo, you could keep shooting forever.  But I'm so picky, I took it in for service.

Meanwhile I've spent two and a half weeks using my old camera.  I remember why I upgraded -- its ability to focus had started to flag as it got older.   For instance, here's a piece of artwork from the Fantastic Fibers show in Paducah that I shot a half dozen times and never could bring into focus. 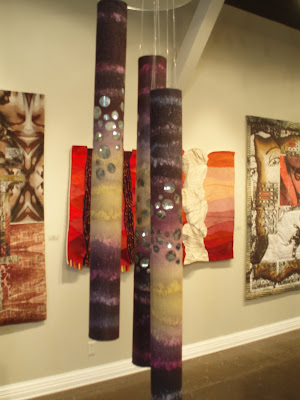 
It's a neat piece, with LED lights inside the tubes, but beyond the capabilities of my camera.  By the way, the show organizers are going to have photos of all the pieces on a website soon, so be patient and you will be able to see this work as it deserves to be seen.  I'll let you know when they get the images up.

A week after I took the camera in, Kim, my favorite salesperson, called to tell me that the Nikon guy had taken a look at it.  The view screen was cracked and could be repaired for $99.

I flipped out.  The view screen was just fine when I handed it in. Kim looked more closely at the paperwork and confirmed that yes, she had looked at the camera and no, there wasn't a crack in the screen.  Kim called Nikon back.  Apparently they got my camera mixed up with another one.  They did fix what was actually wrong with it, and it was under warranty.  (I should hope so.)

I checked on the progress of the camera repair on Monday and was relieved to learn that it had been fixed and was being checked by quality control as we spoke.  But would it be back before we left for a week at the beach tomorrow morning?

YES!  It's so nice to have my toy at hand.  Stay tuned for nice ocean photos next week.
Posted by Kathleen Loomis at 10:37 PM