One of the special exhibits at the quilt show was called "Text on Textiles" and featured quilts where words were a major part of the design.  Since the advent of computer printing onto fabric, we've seen a lot of words put on quilts, not always felicitously.   It's so easy to simply print out words and plonk them down onto your work, so difficult to integrate the words into the design so it looks like art, not an editorial cartoon.

Here's a quilt with a couple of actual words, camouflaged among a lot of single letters.  I liked the jaunty hand-drawn character of the letterforms, which have some type-like characteristics such as serifs but don't attempt to be type. 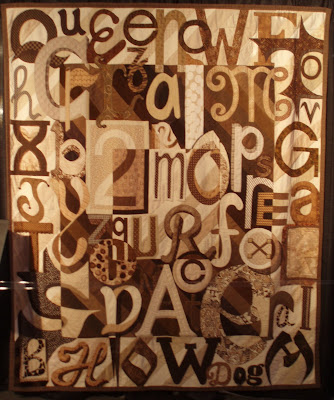 Here's one that uses a found textile, apparently a feedsack, plus commercial fabric, along with what appeared to be text printed and transferred by the artist.  I liked the way all the elements came together. 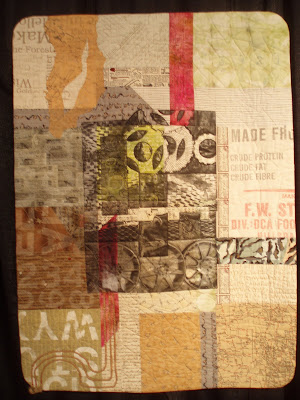 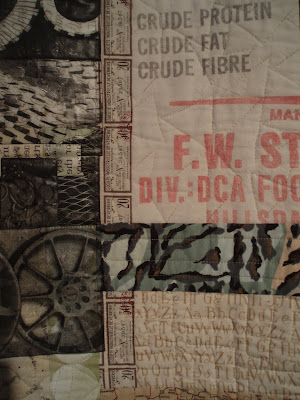 Here's one with a phrase painted and outline quilted across the imagery.  Again, I liked the way the letters mimicked type, but were obviously wavery and hand-drawn rather than precise.  Now that I review my photos, I can't tell whether the hand-drawn quality came from the paint or from the quilting -- perhaps she started with actual printed or stenciled type and then outlined the letters with wavery free-motion quilting.  In any case, I thought it worked well, and provided a bridge between the long printed passage in the background and the drawing of the images. 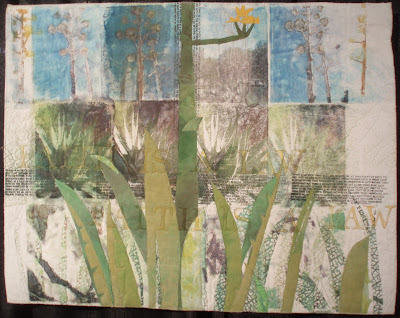 Susie Monday, Faith is a Law (detail below) 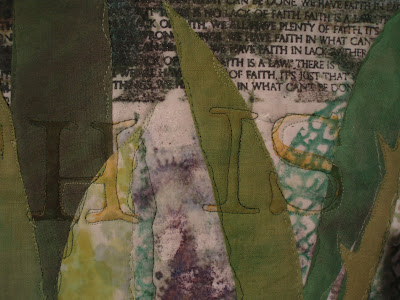 Here's a quilt that handles text in a straightforward way, simply placing words over the entire surface of the quilt.  This piece used newspaper headlines.  The expanse of text was rendered in different colors to make an overlying image.  A couple of other quilts in this exhibit did the same thing, but this was probably the most successful. 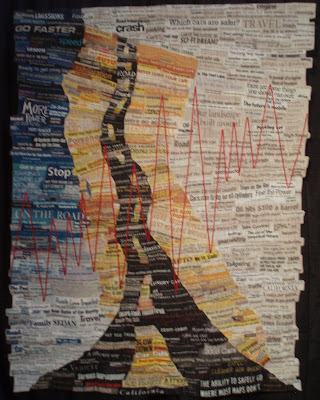 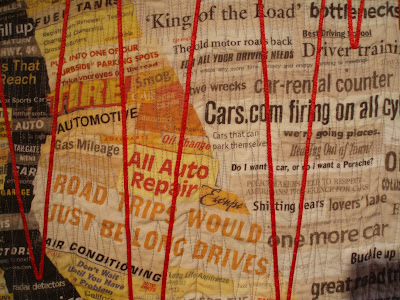 Finally, here's a piece in the exhibit where I thought the text detracted from the art.  The quilt has a striking graphic image, surrounded with four or five screenloads of narrative explaining it.  The story is compelling, dealing with the long siege of Sarajevo in the Bosnian War of the 1990s.  The artist served as a military peacekeeper in that city, and noted that following the siege, the citizens identified places where people were killed by mortar fire as they moved about the streets.  The explosions left scars in the cobblestone pavements, and they were later filled in with red resin that resembled flowers and forever commemorated the huge civilian casualties of the war. 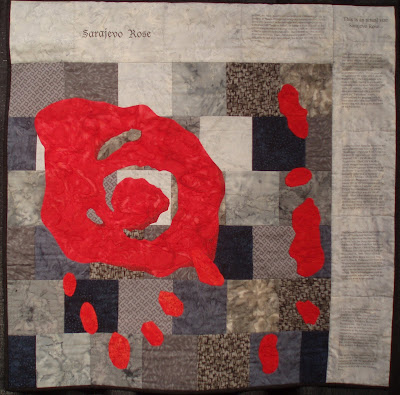 Obviously the viewer appreciates the image more after it's been explained, but I wished the explanation had been provided on a wall sign rather than on the quilt itself.
Posted by Kathleen Loomis at 7:31 PM