How many times have you been advised to prepare an elevator speech?  That's the very brief summary of yourself and your raison d'etre that you give when you meet a stranger.  In the time it takes to ride on the elevator, you give the key elements of what you want to say.  If the stranger is interested, presumably you can both get out of the elevator and continue talking.  If not, at least you've given it your best shot.  Having an elevator speech keeps you from fumbling about or being tongue-tied when you get an opportunity to chat with Bill Gates while you're both waiting for the valet to bring your cars around, or trade pleasantries with Hillary Clinton in the ladies room.

I've given this advice many times, in my guise of career counselor or communication consultant, and I've tried to take it myself.  For instance, I've decided that when I meet a stranger, I say "I'm an artist."  Sometimes the person says oh how nice and changes the subject.  But sometimes he says what kind of art?  In which case, I say "mostly I work in fiber, sometimes on paper, sometimes with found objects."  If the stranger is still interested, we can talk more about whatever aspect of art seems to be of interest.

You may notice a word that is missing from my elevator speech, and it starts with Q.  I have learned that if you drop the Q-bomb too early in the conversation, strangers immediately think about their grandmothers and get the wrong idea of what kind of art is under discussion.  So I won't bring it up until well into a conversation, after we've firmly established that we're talking art, not sewing bees.

But that's the open-ended elevator speech, where you can augment your initial remarks as needed.  Today I've been working on a closed-ended speech about one of my "postage stamp" quilts.  It's a piece that has been touring in Fiberart International 2010 and will soon be on display with that show at the Memorial Art Gallery in Rochester NY.  The gallery wants to offer brief artist commentaries to visitors on their cellphones, and we were asked to record a message between 30 and 60 seconds long.

Thirty seconds is a fairly short time.  If there are other people getting on and off the elevator, it could be a journey of only one floor.  Often when I talk about my postage stamp quilts to quilters I start by describing why I use sew-off squares in piecing, and how I started making little compositions onto the squares to relieve boredom while sewing, and how they eventually took on a life of their own as art.  But not in thirty seconds!

And of course, that kind of conversation would probably be totally meaningless to museum visitors who aren't quilters and wouldn't know a sew-off square from a blintz.  So I decided to talk only about the meaning of the work, not its construction.  Which is probably a better way, since meaning is always more important than technique.

I found this to be a useful exercise for me.  It helped me clarify the ideas I want people to walk away from my quilt with.  I think the message will be understandable and meaningful to artists, non-artists, adults and children alike.  Now I'm going to think about a 30-second elevator speech for each of my other quilts, just in case I need one! 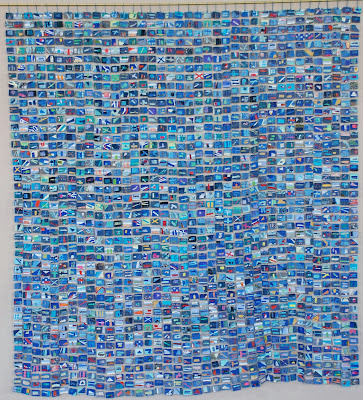 I’m Kathy Loomis and you’re looking at my quilt “Regatta.” It’s a happy scene, people out in their little boats on the water, having fun. But the threads holding it all together are so skinny, so delicate. What if there is an earthquake or a big storm, or the power plant blows up?

So much of our life is like that – the bonds that hold it together are so fragile. We’d all better do what we can to keep them from breaking.


Posted by Kathleen Loomis at 7:07 AM