In late July I taught a quilting workshop and brought two huge bags full of fabric, equipment and miscellaneous stuff.  As I left on the last afternoon, laden down with mysteriously more stuff than I had brought, I made a terrible mistake -- I left my spray bottle behind. 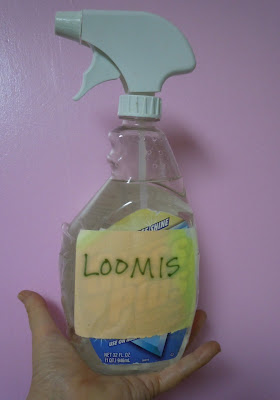 My spray bottle is a precious possession.  You might not think a quilter even needs a spray bottle, what with steam irons and all.  But I hate steam irons.  They spit nasty black crud onto your fabric every now and then, and after a particularly traumatic experience in a hotel room once where the crud ended up in the center of a white dress that I was about to wear to a fancy dinner, I swore I would never let that happen again.  For more than 40 years I have kept my irons in their virgin state, never putting a drop of water into their little innards.

As a result, I've never had any black crud spit upon on anything I've made.  But I have been dependent on my spray bottles to make up the difference.

You might not think it would be too hard to come up with a decent spray bottle.  They sell them everywhere, in case you can't just use a recycled bottle once the Windex or whatever is used up.  But in my experience spray bottles are surprisingly temperamental; they "spray" wimpy droops of water, or they require too much hand strength, or they refuse to spray at all.  Over the years I've had some spray bottles that I loved, but somehow they disappear and I have to search for the perfect replacement.

My wonderful spray bottle, inadvertently left behind, was one of the better ones.  It used to hold Glass Plus.  A dear friend gave it to me, empty, several years ago and I've treasured it.  It's big, so refills last a while, and the spray action is sufficiently leveraged that I can spray-dampen an entire quilt pinned up on the wall without having to switch hands or take a break.  It's been shlepped with me to workshops in several cities and always done me proud.

But now it was gone.  Going back to fetch it seemed like a big production, not only in miles but because I would need somebody else to come with me to unlock the work room.  That seemed like an excessive response for a piece of plastic that had cost nothing to begin with and surely would be replaceable.

So I looked around the house for another spray bottle.  I found one, washed it out and filled it, but it wouldn't spray.  I repeated the whole process, and this one wouldn't spray either.  I repeated the whole process, and the third one sort of sprayed, but did a bad job of it.  I was in a fabric store and irons were on sale, so I bought one, and put water into it for steam!!!  The first time in four decades.  It didn't seem to work up enough heat for the steam to properly press my piecing, so that I was dampening the seams with a wet washcloth for extra oomph.  And best of all, a week after I bought it -- wait for it -- it spit black crud onto a class sample I was about to take with me to a workshop.

I was between quilting projects and the lack of a decent ironing system led me to spend weeks working on paper rather than starting a new fabric project.  But finally there's good news.  A month later I went back for another workshop in the same studio, and the bottle was there, in the same corner where I had left it a month earlier.

I'm in heaven!  I can iron again!  If I can find the sales slip for the new iron, it's going back to the store; if I can't, I'll hope it will dry out and live a productive life, never again to let the demon rum pass its lips.

Posted by Kathleen Loomis at 6:41 AM