I wrote yesterday about Terry Jarrard-Dimond's work in a show in Spartanburg SC.  It was a joint show with her husband, Tom Dimond.  But the show's clever title, Pieced Together, doesn't refer just to Terry's pieced quilts but to Tom's paintings as well.

Tom has been using the stellated dodecahedron shape as a motif for many years, ever since he saw it on the floor of a church in Venice; it was a favorite shape of Uccello in the 15th century.  I think they included this old painting in the show as evidence that this is not a new idea! 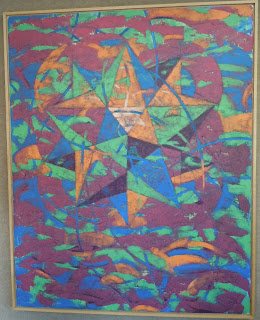 
Now he's using it in a new format, in which he simultaneously makes four separate collage/paintings, cuts them up, and reassembles the pieces into four new works, each containing something from all four originals.  He uses the dodecahedron as the template for cutting and pasting -- or perhaps we could say "piecing together." 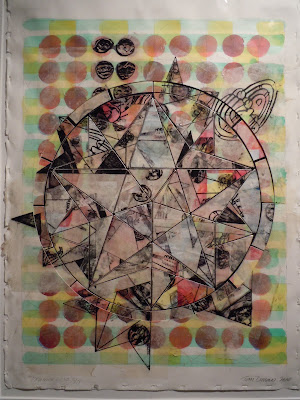 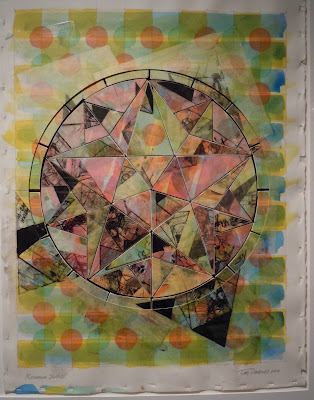 The works look interesting from across the room but don't start to pay off until you get up close and look at the fine details of his underlying collages.  In his gallery talk, Tom explained that the title "Reunion" refers to putting together images from the past of general art and culture, plus images from his own past.

So, for instance, in one of his suites of four, the place of honor, the top segment of the central pentagon, always contains an image from Krazy Kat, the old comic strip that Tom loved as a kid. 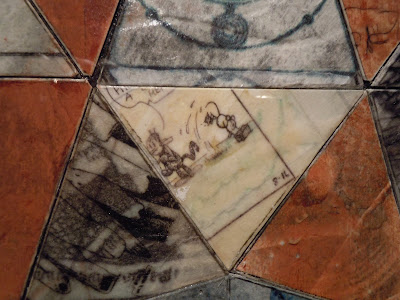 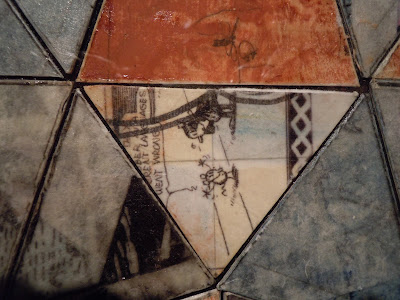 Close inspection shows many other small bits of recurring imagery, including rubber stamps, phototransfers, doodles, and his son's childhood artwork.  One of his collages started as the desktop on which he and his officemates wrote years of phone messages and reminders. 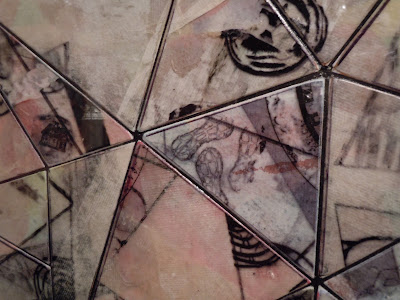 I was excited by the complex process of layering images in the underlying collages and then cutting and piecing them into the final works.  The little bits held together by the conceptual structure of the star struck a chord with me -- it's an approach that I could see myself using, even though I could never see myself making a "painting" in the conventional sense.  I've even been toying with the idea of committing the sincerest form of flattery and trying my own take on this collage/reassembly process.  Thanks in advance, Tom, for not suing me for stealing your idea.....
Posted by Kathleen Loomis at 6:27 AM