Back in school -- more on death images

Yesterday I posted an essay that I wrote for my art history class about the power of images to shock viewers, and mentioned specifically how images of dead bodies have such mojo in today's world.  To illustrate it, I went to Google Images to find a photo of flag-draped coffins coming back from Iraq, considered so inflammatory that for many years the Bush Administration was able to ban any such pictures from being taken.

To my amazement, when I typed in "flag-draped coffins Iraq" I found on the first page of images a photo that looked quite familiar -- it was my own quilt, Kentucky Graveyard (Iraq). 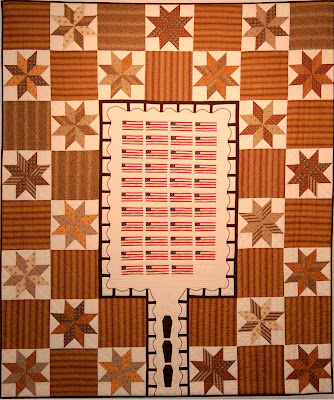 The quilt indeed featured flag-draped coffins.  I made it in 2006 and I had written about it in my blog at the tenth anniversary of 9/11.  The next thing you know, there it is on page one of Google.

Heck, the only way I knew of to get on page one of Google was to type in my own name, and even then, other people show up.  On a more serious note, it's only because there were so few photos made of the flag-draped coffins from Iraq that my quilt had the slightest chance of being noticed.  I guess that proves the original point: images of death have immense power.
Posted by Kathleen Loomis at 5:54 AM