I wrote the other day about using old embroidery floss (my advice: go ahead and use it!) but probably even more people wonder about using old sewing thread.  Yes, thread deteriorates with age, but I just flat-out hate to throw things away that are still usable.

I once attended a meeting of a ladies' sewing circle at a church.  They were collecting sewing things for a fundraiser, and proudly showed off a huge bag of donated thread that was so old that most of the spools were wood.  I pointed out that the thread was so rotten that it snapped when you looked at it, and told them not to sell it.  They were grateful for the advice.  (Then I gave them some money and took all the wooden spools home with me, which arguably was a conflict of interest....)

Thread on wooden spools goes on display in my collection; I won't use it for any kind of sewing.  But thread on plastic spools can be just fine for some purposes.

I would not use 20-year-old thread to sew a garment, or for mending, because it's not strong enough to hold up to being pulled, tugged, stretched and washed.  I also wouldn't use it for quilting, because old thread is more likely to break as it goes through the machine, and that makes for messy work.

But I've used old thread a lot in places where it's not under stress and never had problems.  After all, Dual Duty, the thread that is most likely to preexist in your stash or in a bag of hand-me-downs, does have a polyester core.  You can even use 100% cotton thread, far more susceptible to rotting and breaking, for some projects. 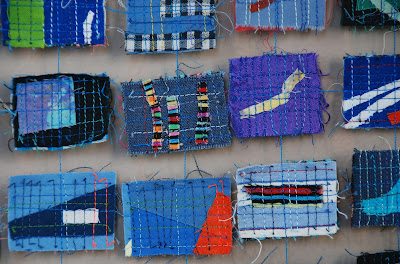 On this quilt, I used new thread for the weight-bearing suspension threads, but used up lots of old thread for the heavy stitching on each little fabric sandwich.

I'm also willing to use older thread for piecing with small bits of fabric and lots of crossing seams.  If it breaks during construction, I can go back and restitch, without it showing. I don't wash my art quilts, so the thread won't be stressed, and I quilt them heavily (with new thread), so even if a seam pops later, nothing is going to escape.

I know that many people will be scandalized by my cavalier attitude.  Isn't one's Art So Important that it deserves the Very Best Materials?  Well, yes and no.  Where the quality of a material will affect the look or function of your piece, then yes.  Where a possible flaw would have serious consequences, then yes.  Otherwise no.  I've written in the past about snobbery, and how different people choose to be snobs about different things.  Obviously the age of my thread is not one of my chosen preciousnesses.

What has your experience been?