Back in school -- sex and death

I wrote last week about how I'm taking a graduate-level art history class, after an extended absence from the classroom.  We're writing every week, and I thought I might share some of my work with you.  Here's a slightly edited version of my first paper, based on an article that riffed on Titian's Venus.

I’m talking about images of dead bodies.  Death has always been a subject for art; images of Christ on or just taken down from the cross, and of martyred saints were mainstays of churches, Bibles and devotional books.  Sarcophagi of nobles and high clergy were customarily crowned with sculptured corpses.   The Black Death brought a plague of artworks of horror and disruption following that vast series of epidemics.   The danse macabre, showing partying skeletons, was a common image. 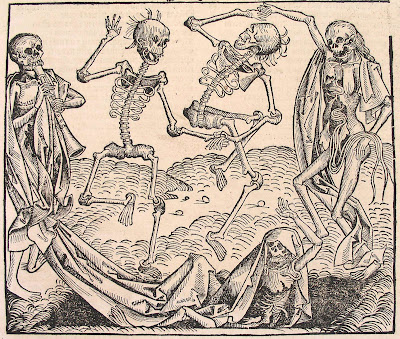 Slightly more subtle, but still firmly focused on the inevitability of death, were the memento mori and other still life paintings that came later.  The dead bodies might be rabbits, pheasants and fish rather than people, but the message was the same – you’re next.

People who saw art, whether as paintings, sculpture or book illustrations, had to be familiar with images of death.  They probably took the images seriously as come-to-Jesus reminders, but I suspect their emotional responses were more awestruck and solemn than shocked.

Even as the centuries passed, images of death stayed at the forefront of consciousness.  Early photographers frequently took pictures of the dead (a big plus in those days of long exposures: the dead could really hold still) and it was fashionable to wear lockets with little death photos, perhaps along with a lock of the deceased’s hair.

I don’t know exactly how public attitudes (at least American attitudes) toward death images changed, or how quickly.  Perhaps it started with the advent of “real” death images instead of mere artist representations; if so, the extensive photographic documentation of the Civil War surely was an important first step.

The horrors of subsequent wars were even more closely covered.  And yet there was a consensus among photographers to withhold the most disturbing images of battlefield casualties in the World Wars, at least until years later.  The American public saw photos of the dead at Dachau but not on the Normandy beaches.  The very fact that television news of Vietnam showed same-day carnage is credited with changing the public view of that war.

It’s not as though we haven’t seen plenty of images of death, primarily in wartime.  But in the last half-century those images seem to me to have become more shocking, more taboo, even as sexual images have become more commonplace and less shocking.

I’d like to know more about how contemporary artists  have depicted dead bodies, and how these images were received by the critics and by the public.  Warhol’s images of car crashes and suicides, and Serrano’s images of bodies from the morgue, would be high on the list.  A bit of googling reveals that critics and public alike found it easy to disapprove of these artworks, and I suspect these were not the only such cases. 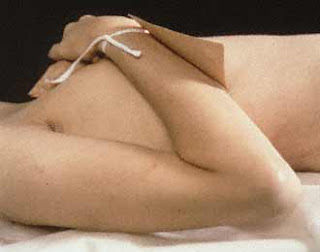 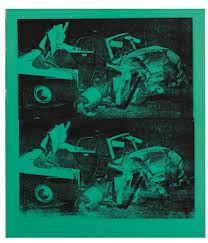 More recently the public was shocked by images of people falling from the World Trade Center on 9/11.  Readers protested when newspapers published photos of falling victims.  Eric Fischl’s bronze statue, “Tumbling Woman,” inspired by the event, was installed at Rockefeller Center but within days it was covered up and subsequently removed after people were upset. 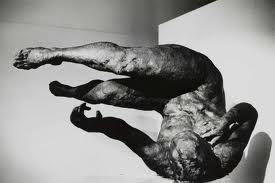 Not high art, but certainly important in the public consciousness are many disturbing death images from the war in Iraq.  The Bush administration was so aware of the power of images to shock and galvanize the public that it banned any photography of flag-draped soldiers’ coffins returning to the US. 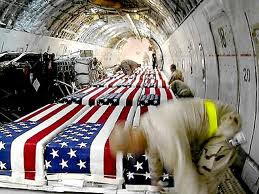 Journalists have gone through immense self-flagellation over whether and how they should present notorious death images such as the video beheading of Daniel Pearl, and the US contractors ambushed by crowds in Fallujah, then killed, burned and hung from a bridge.  Almost always their readers and viewers rise up in protest when such images are published, accusing the editors of sensationalism, and perhaps political motives.

Perhaps sex and death have changed places in the public's visual universe in the last fifty years.  Where one used to be seen as shocking and pornographic, now the other one is.

Posted by Kathleen Loomis at 6:33 AM