I'm auditing an art history class this semester, my first time back in a formal classroom in several decades.  Although I've taken a lot of workshops in the last decade, many of them quite rigorous in terms of workload, expectations and critique, these have all been studio courses, so to speak.  This one is pure academic, complete with assigned readings and weekly papers.

I told my son recently that it seemed a lot different than the last time around, in particular that I found it more difficult to concentrate.  He said he thought it would be the other way around, that my more aged mature self would be better at such tasks.  I speculate that something about computers has altered my brainwaves.  (A much more comforting diagnosis than early dementia.)  I know that even when I'm engaged in something interesting and engrossing, such as writing my blog or reading a thriller, I'm likely to switch over, at the least provocation or maybe no provocation at all, on an expedition to the kitchen or laundry room or to check my email.

So imagine my potential for distraction when reading such sentences as "The work of art as a sinthôme on the other hand, is a unique response, that contains the enigma it corresponds to and, that brings it about, an enigma that resonates a lacuna of quite different status in the Symbolic; it does not correspond to lacks defined by the phallic mechanism of castration but to whatever is not there, to what is yet to come, to what resists the Symbolic and to the mysterious and fascinating territory of that which is not yet even unconscious or to what is impossible for cognition."  Don't you need some microwave popcorn right about now?

I have taken to rating the assigned readings along the lines of the Michelin Guide, except where Michelin awards stars for culinary excellence, I am awarding dictionaries.  (A five-dictionary article means I had to consult the dictionary five times.)

But enough snark.  Although art critics and scholars seem to have taken a sacred oath never to say "originality" when you could say "originariness," never to say "essence" when you could say "quiddity," they do have some interesting things to say once you decode the messages.  I'll let you know when I learn anything worth passing on.  I have a fine teacher who can effortlessly translate artspeak into English, and between his slides and Google Images I'm getting to look at a lot of art, some of it familiar, some of it new. 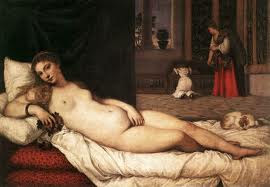 One of our first week's readings featured Titian and his "Venus of Urbino."  Today, we may yawn, because we've seen the reclining nude a bazillion times, but in 1538 this was hot stuff.  In a subsequent post I'll give you the ten-cent version of the paper I wrote about it.