I'm sure that some stitchers are compulsively neat about their floss, keeping it wound on those little cardboard cards or pulling only as much as they need from the skeins.  And some have stitching habits that impose arbitrary discipline on the stash.  For instance, Judy Martin, whose work I am in awe of, has a daily art project in which she stitches up one skein of floss every day.  If you're always starting with a fresh skein, and you finish it all up right then and there, you can't possibly end up with a mess.

Then there's me.  No matter how neatly I try to work, I can rarely get the floss to pull smoothly out of the center of the skein, so I end up with globs and often have to remove the little paper bands.  And after I separate the floss into two three-strand portions, I often end up with the leftovers just sitting there, dying to get into trouble the minute my back is turned. 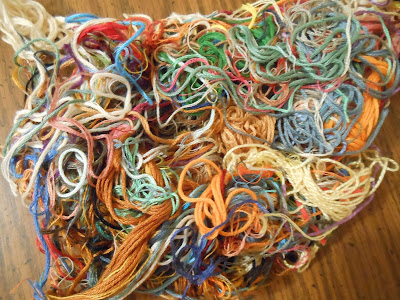 So my floss collection includes more than one clot of snarled miscellaneous.  In fairness to myself, I don't think this is entirely my own (ir)responsibility.  I know that some of those aggregations came from other people, including Grandma, so they're probably decades old.  I also recognize some of the floss as having come from kits that I got in the 1960s, or that I bought when we lived in Germany in the 70s.

With a collection like this, I have no hesitation about using anything that I see.  Not sure I would want to lower myself from a skyscraper on a rope made of 40-year-old floss, but how much stress is ever put on embroidery?  Occasionally a thread might break if I have managed to get it into a tangle and have to yank it free, but that's also true of new thread.  When that happens, you just cut out the part that broke and start over.

One of the email list people wrote to say that she had a 50-year-old dresser scarf embroidered with black, which has now faded to the point of virtual invisibility.  But that was after 50 years in the sun, not 50 years in a sewing bag.  Perhaps today's threads are more colorfast, but I'm willing to take my chances on yesterday's threads.  If nothing else, I suspect their history will give my work an air of mystery and authority.


Posted by Kathleen Loomis at 6:25 AM