Q=A=Q gives two awards for specific techniques: one for handwork and the other for surface design.

The handwork award was a no-brainer -- Beth Miller's map of Canberra, the capital of Australia, executed largely in hand-stitched black and grays on white. 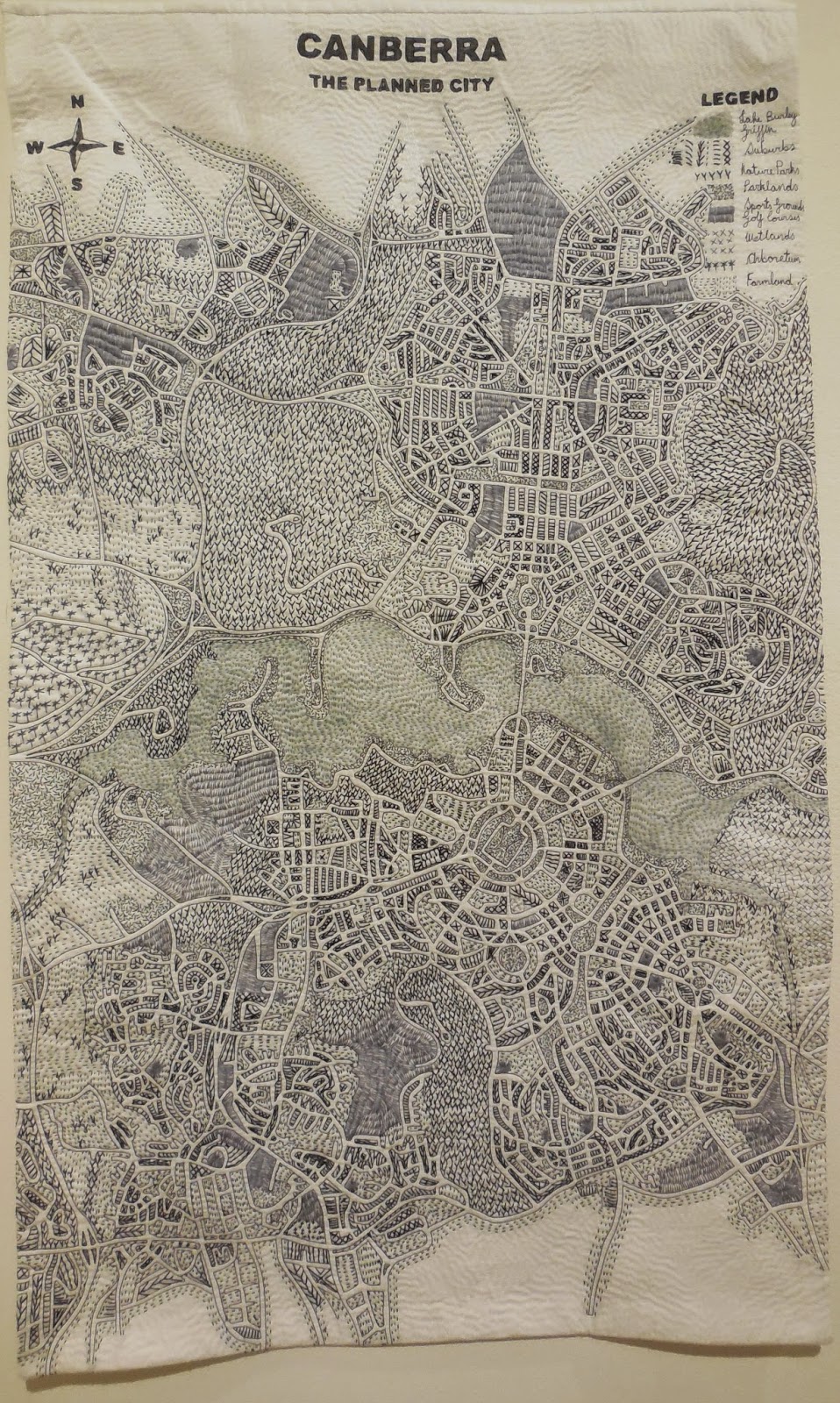 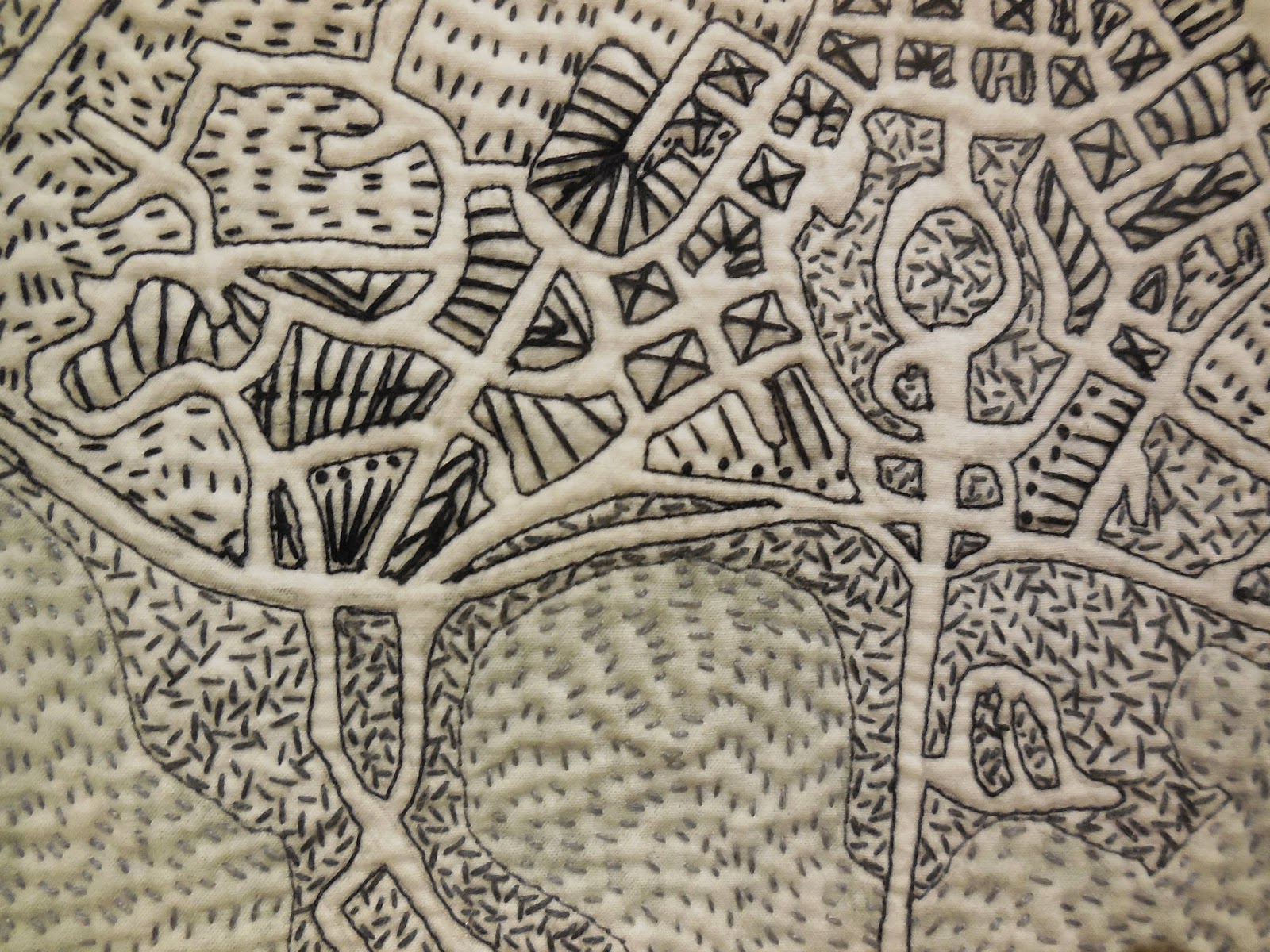 The scale was modest, but that meant the stitches were quite petite: running stitch, fly stitch, french knots, cross stitch and probably others that I didn't take the time to identify.  By varying the thread color and the stitch density, she achieved a wide range of tones and patterns appropriate to a map.

Update:  thanks to Brenda Gael Smith, who points me to an old blog post here in which Beth explains how this quilt came to be made.

But there were plenty of contenders for the surface design award, and I probably spent longer on that decision than on all the others put together.  In the running were all the usual techniques: painting, screenprinting, shibori, phototransfer.  In the end I chose Ayn Hanna's piece, which combined deconstructed screenprinting with direct dye drawing. 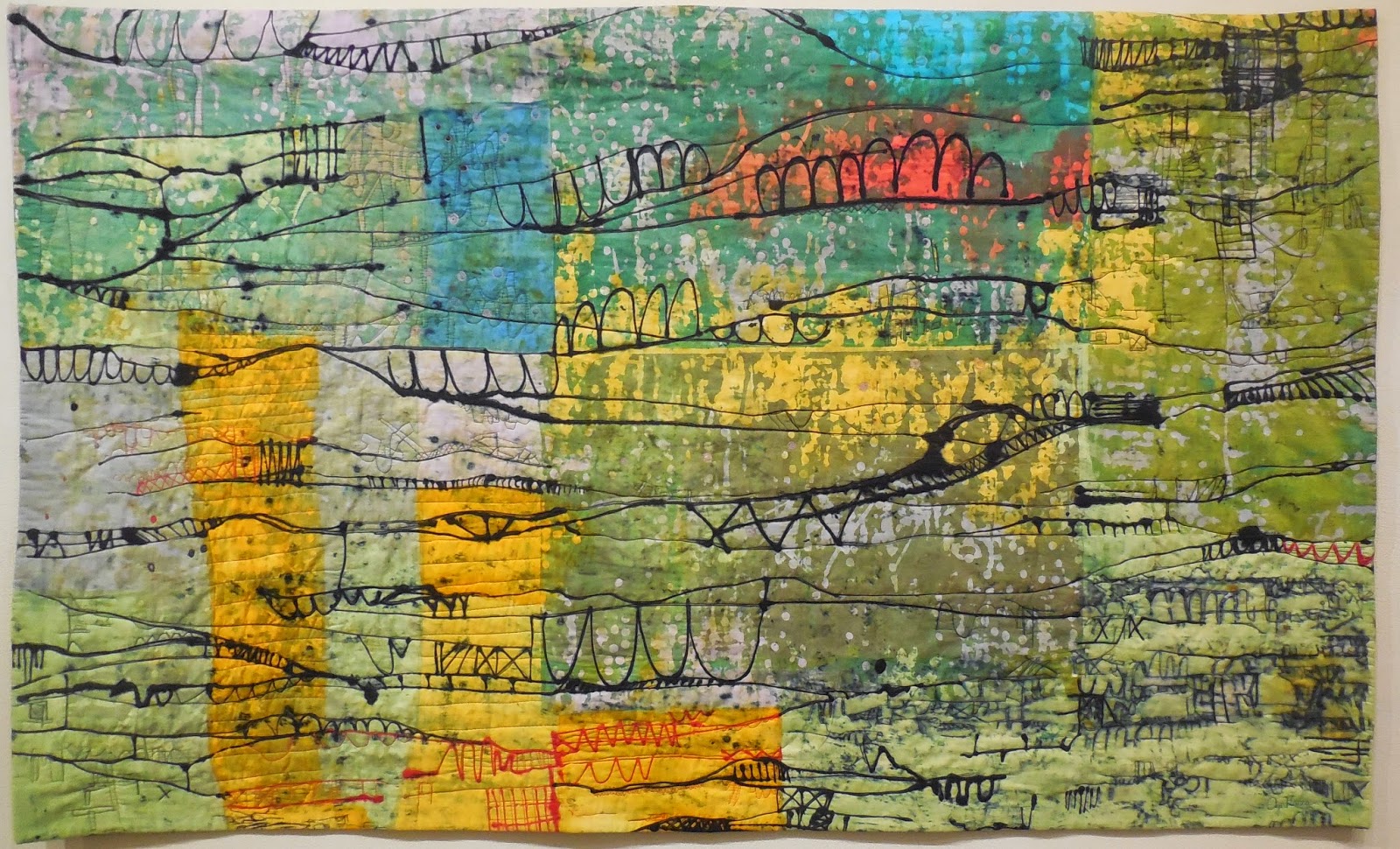 I loved the jaunty freedom of the drawing line, with its changing width and occasional blotchy nodes.  I liked the little sections where she drew in red, a change-up from the predominant black.  And I liked the subtle, mostly muted background, its rectangles referencing traditional quilt block construction.

Two others from my surface-design short list were so appealing that I gave them awards too.  Juror's Choice went to Judy Hooworth. 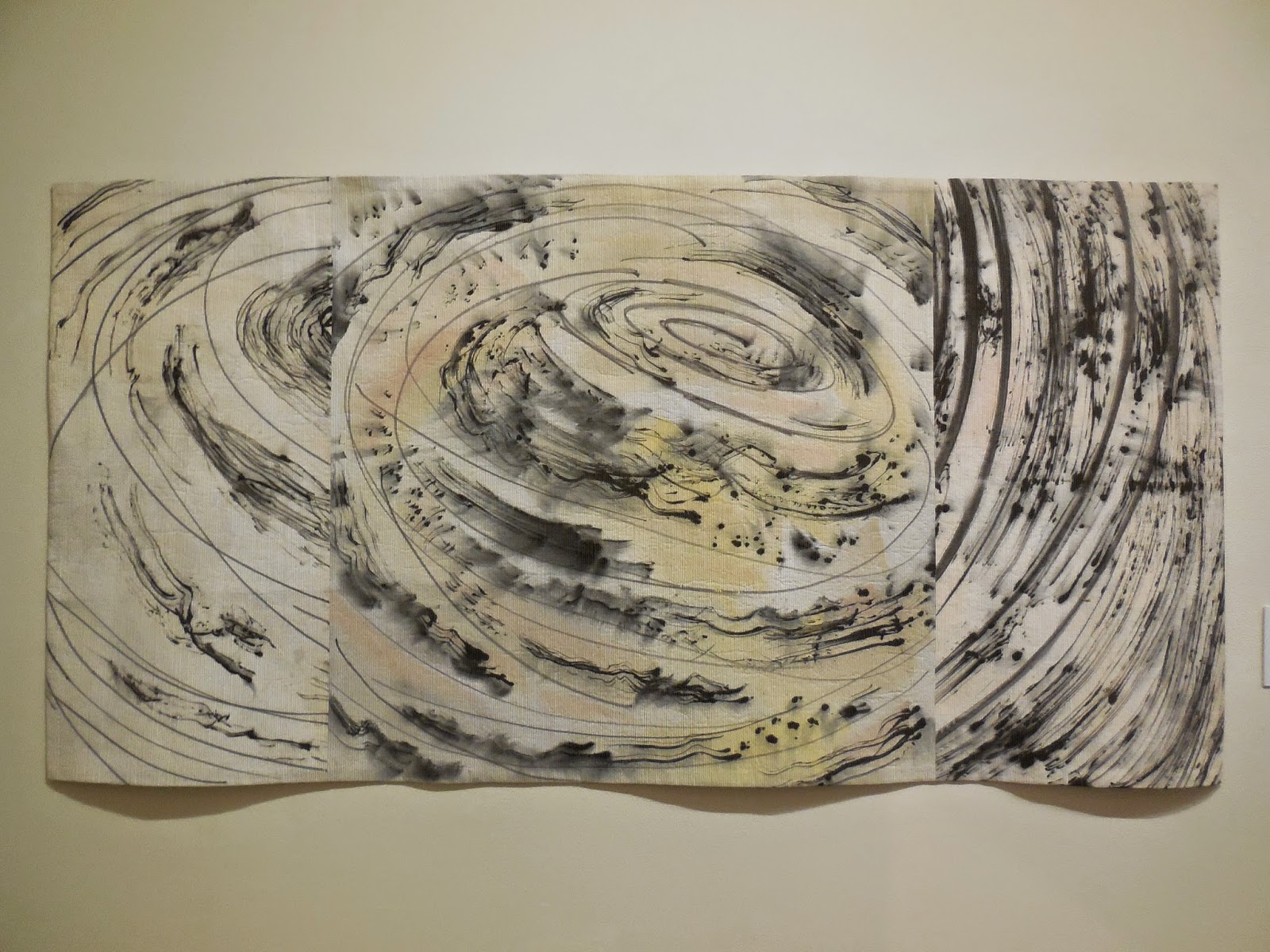 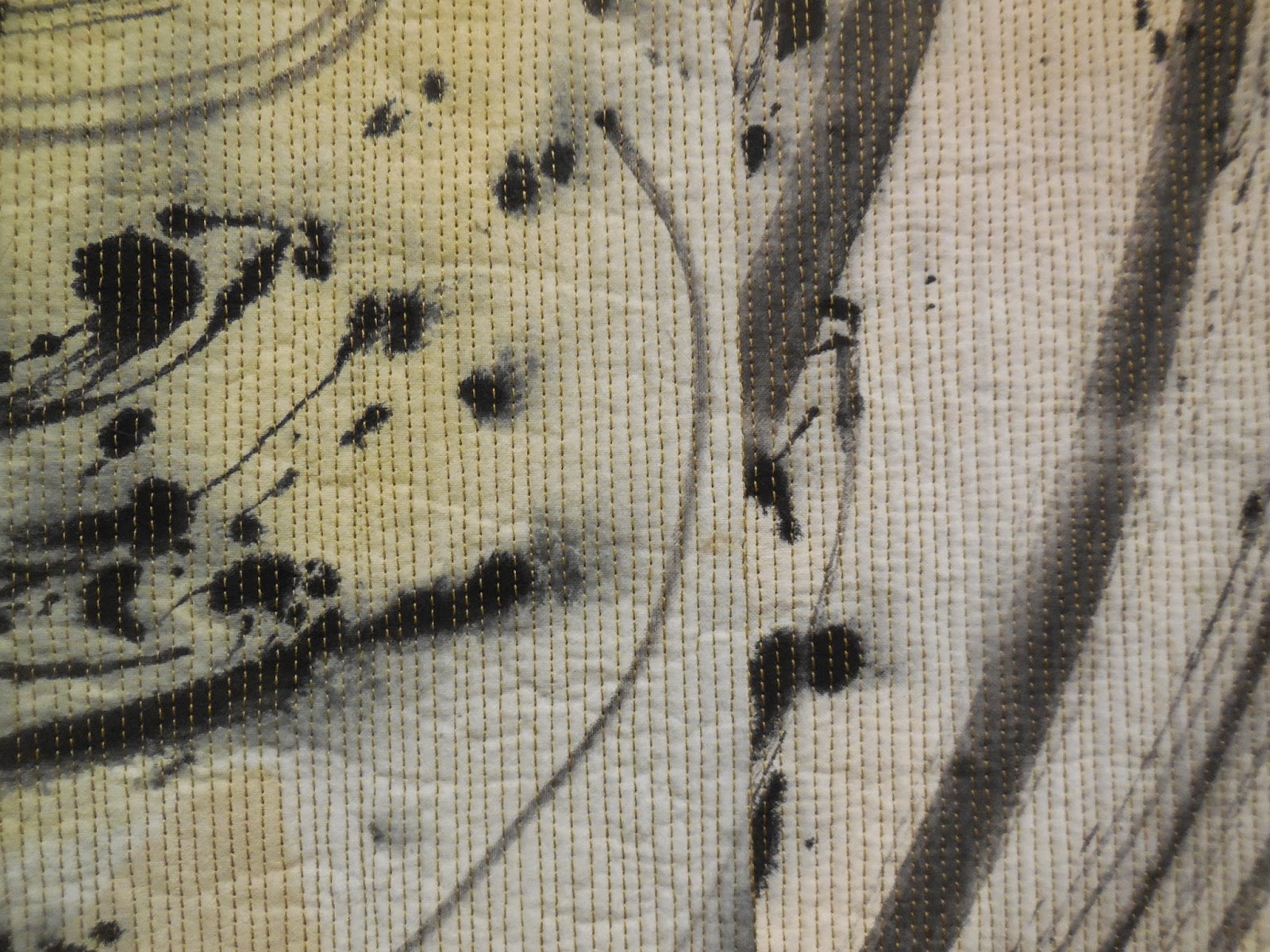 I was drawn by the calm palette and equally calm design, nothing more than ripples on the water, although it could also be nebulas in space or an aerial view of the desert.  The two vertical seams cutting the design provided just enough tension and interest to give us three places to look, and to note how the background was slightly different in each.  I loved the wavery lines, drawn wet-on-wet to give an out-of-focus, transitory look to the design.

I've followed Judy's work for many years, having first seen it in person at Quilt National 2003, I think, and have been fascinated as her methods have gotten more austere in both technique and palette.  (The QN piece had lots of raw edges and dimension, and was a wild abstract design of hot reds and yellows.) 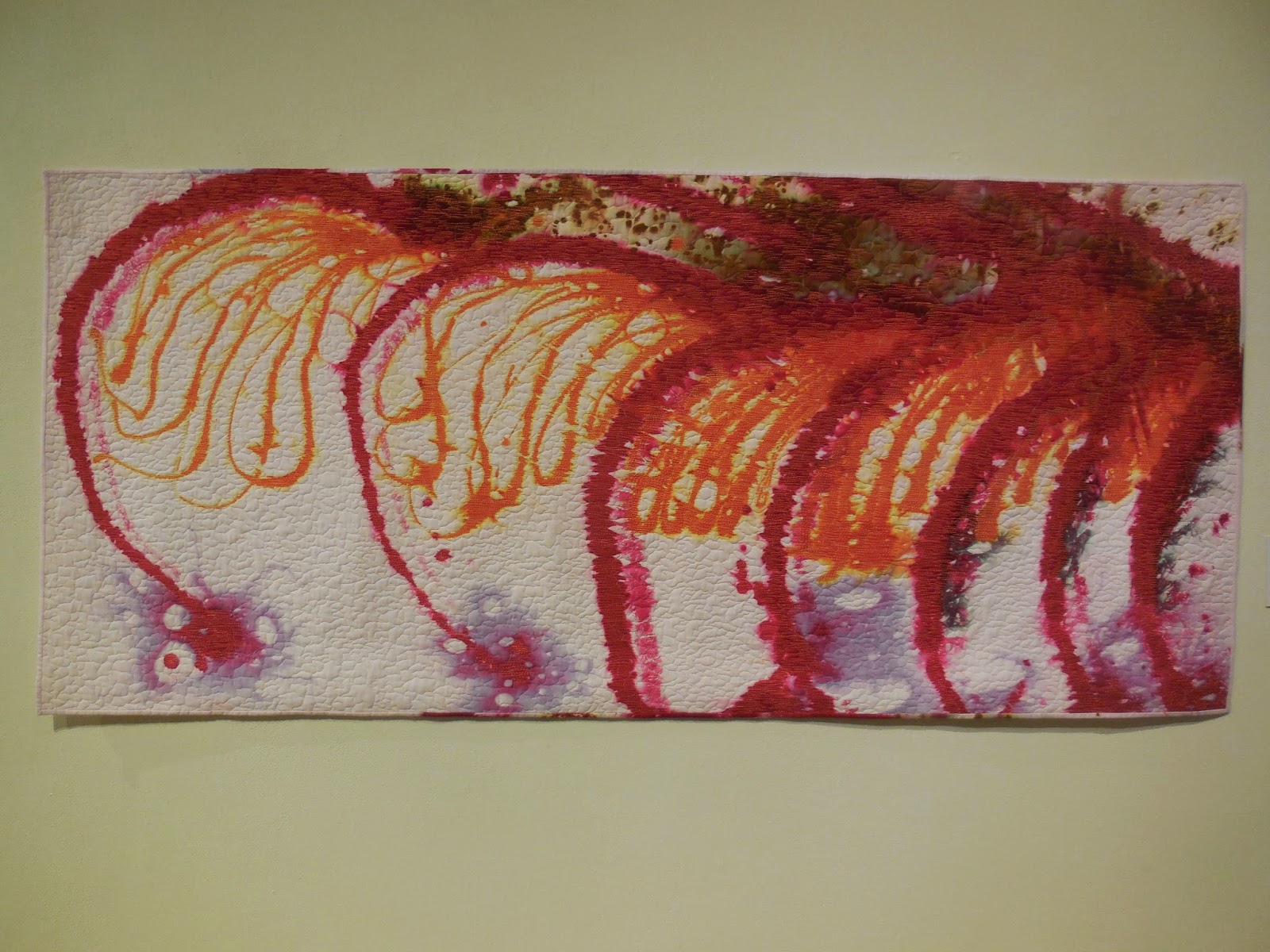 The vivid red, fuchsia and orange dyes on stark white, called from across the room; the exuberance of the design made me think of a cross between Jackson Pollock's paint-flinging and Terrie Hancock Mangat's long series of pieced fireworks.