Yesterday I wrote about representational imagery in the Q=A=Q show at the Schweinfurth Art Center in Auburn NY.  Shortly after the show opened I exchanged emails with Patty Kennedy-Zafred, who had a quilt in the show but had not been able to attend the reception.

She wrote me:  "It appears that a large portion of the pieces chosen were abstract, color/design study, a trend I'm seeing more and more.  Do you think that is just coincidence, a trend in the art quilt movement, jurors' preferences?"  She said she thinks the same was true of other recent major art quilt shows.

I don't know whether the preponderance of abstract works is really a trend, but it was true in Q=A=Q this year.  And as both a Q=A=Q juror and an interested observer of the art quilt scene, I think that's probably a good thing.

In my experience, the great majority of representational imagery to be found in quilts is decoration rather than art.  Flowers, birds, rose-covered cottages, snowscapes, mountain sunsets.  For the non-traditionalist, puppies, fish, kids playing (extra points if your own kids or grandkids or puppy).  For the very adventurous, render your puppy in purple instead of his natural brown and white!  Many of the quilts featuring such decorative images are very pleasant, but I have a hard time thinking they belong in a high-end show of quilts as art.

What makes it art, in my mind, is a concept, an intention, a message, something more than "it's pretty."  (And I'm not just describing quilts; there are plenty of paintings that stop at "it's pretty," and while you might enjoy them on your bedroom wall they probably don't deserve space in a museum.)

Also in my experience, most representational imagery in the quilt world tends toward the highly realistic end of the spectrum.  The more it looks like a photo, the more it's likely to be the viewers' choice.  Unfortunately, fabric isn't a medium particularly conducive to photorealism.  Sure, you can painstakingly render your photo in pixelated form, find fabrics of the appropriate value and hue, and   applique them for a startling resemblance to the original picture, but aside from the technical gee-whiz of the transformation, this process generally leaves me cold.  I'm usually not sure why the artist did it, or whether the resulting quilt is a step up or a step down, artistically,  from the original image. 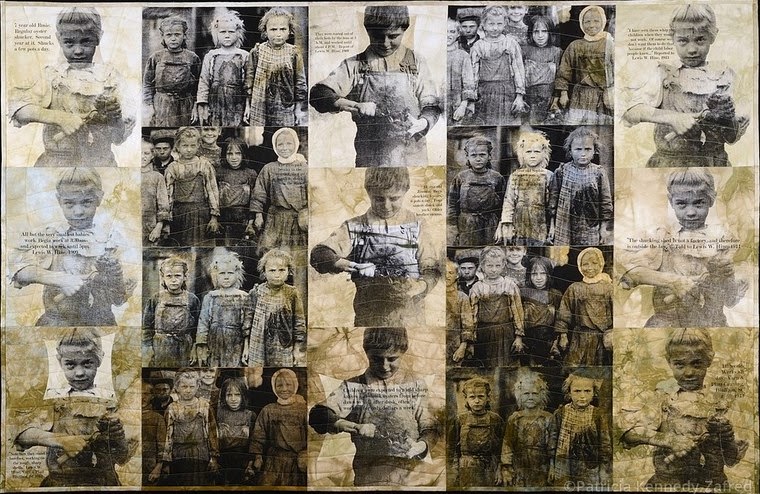 Patricia Kennedy-Zafred, Sand and Sea: The Children of the Canneries

Of course, if you want photorealism, you can simply print your photo onto the fabric.  Sometimes this works brilliantly, as in Patty's Q=A=Q piece shown above.  She has taken historic photos from the Library of Congress, reproduced them on fabric, overlaid them with text describing the subjects, and enhanced the photos with dye and ink.  The result is clearly her own work, incorporating comment and context, and not just a rendering of the original photo.

But too frequently quiltmakers stop after they print the photo onto the fabric.  I've seen too many photos just plopped into the middle of a quilt, perhaps with some handlettered identification.  I won't jury that kind of work into a museum show because it doesn't seem to have a purpose.

A Toronto curator was recently quoted in connection with the World of Threads exhibit as saying, "It is essential for artists working in fibre to push the boundaries.  Think long and hard about what the conventions and cliches are of your media and process.  Why does it have to be that way?  Do other people find what you are making meaningful?  Does it communicate to them?"

Too many representational quilts are "conventions and cliches," in my opinion, largely because of subject matter but also because of technique.  I guess a lot of abstract quilts are also cliches, but in general I think the quilt format is more friendly to abstraction than to representation.  That's probably because of the predominance of geometric and abstract blocks in traditional quilts, a heritage that is hard to escape.