A handful of pieced quilts that I particularly liked at Q=A=Q, today focusing on bright colors. 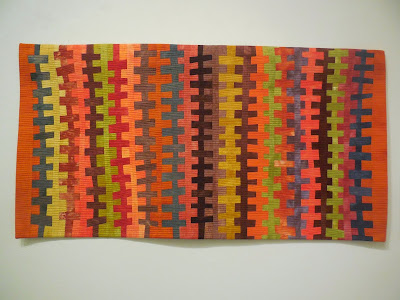 The title refers to the concept of terra nullius, land belonging to nobody, which European settlers used to rationalize their takeover of native terrain around the world.  Brenda, who lives in Australia, uses hand-dyed fabrics to reproduce the glowing red desert colors of aboriginal lands.  I liked the simple motif of interlocking spines, elegant in its simplicity. 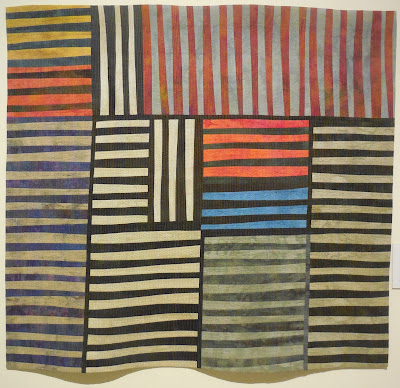 Helene is known for her hand-dyed fabrics and this quilt shows off the richness and subtlety of her palette.  I like the contrast between the clear reds and blues and the dusty grays and greens.  Isn't it nice how simply putting a "field" into the corner of some stripes is enough to turn them into a flag?  I suppose that effect is not as strong for viewers outside the U.S. whose own flags have other patterns. 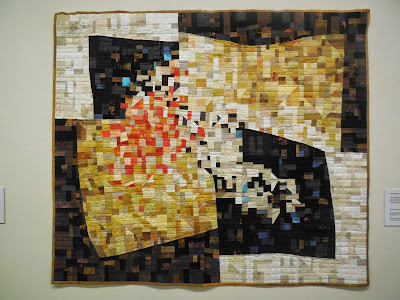 Small bits of fabric, sewed together without a clear pattern, mostly arrange themselves into light and dark areas, but in the center they turn to confetti.  The reds, concentrated at left center, and the handful of blues accent the overall square-in-a-square arrangement.  Calm and exciting at the same time. 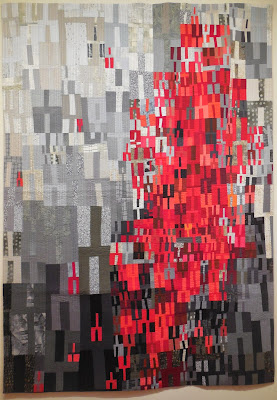 The twin sister to this quilt appeared in Form Not Function last summer, and it might be worth a couple of clicks (here) to compare and contrast.  This one has red forks on a background of gray; the other one had gray forks on a background of red.  An excellent case study in exploring many permutations of a motif; I love seeing shapes in many different sizes used together. 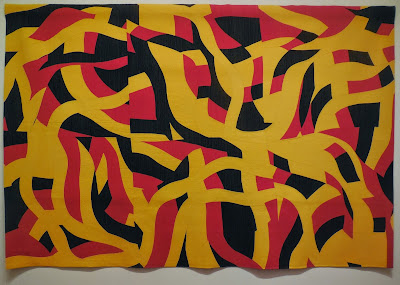 I think she must have constructed several pieced panels, then sliced and recombined them several times to come up with the complex overall design -- but I can't tell from looking at the quilt which piece used to be next to which other one.  It's always good to leave your viewers guessing!  I like the exuberant colors, the bold design and the irregular curves.

A back story: seven years ago Denise and I worked for a week in the downstairs studio of the Crow Barn, each of us busy with our own compositions but enjoying the companionship of somebody else sewing madly on the other side of the room.  She tells me that I am responsible for naming the series of quilts she began during that week and has now taken to number 10.  I wish I remembered that conversation, but am certainly willing to take credit for whatever small part I played in setting her on this fruitful path.