I've been writing about failed series -- those that for various reasons didn't have enough momentum to launch past the third or fourth piece.  In addition to those I've showed you recently, I have written in the past about my River Maps, my Landscapes, and my Planets.

In reviewing these chapters of my past, I've tried to come up with some unifying thoughts about how to tell whether a series is going to work or not, and when and why to abandon one that doesn't seem to made the grade.

First, I realize that a series has to work in two different ways: it has to have visual appeal (because who wants to spend lots of time making work that doesn't look good) and it has to have meaning.  Meaning is more difficult to define and identify; it's more than just a slogan or a "message."  It has to be a message, or a subject, that is special to you, that will satisfy you for a long time as you explore it. 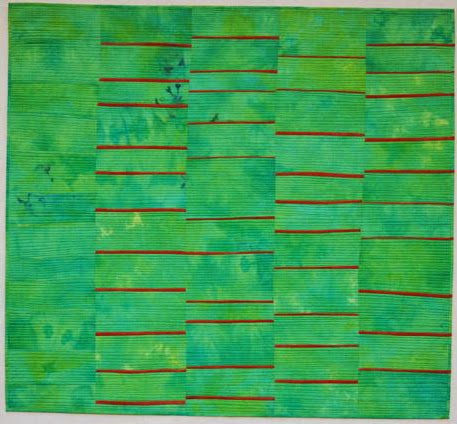 My Landscape series failed because I could never quite figure out what it was about.  I liked the visual concept, although I was going to have to pay more attention to the composition if I continued the series.  But it had no meaning beyond the technical "five columns of stripes" description.

My Revelations series failed because its "meaning" wasn't deep enough to engage me; it had no personal relevance.

For me, failed series have most frequently come from lack of meaning.  For others, perhaps the visual execution is the stumbling block.  If you have a series that has stalled, try to figure out why -- is it meaning, or visual appeal, or perhaps a bit of both?

But don't be too quick to abandon a series.  If it was interesting enough to make you think you might want to work on it for a while, it probably deserves a fair shot.  I gave each of these series at least three tries; I explored a couple of different aspects, attacked some of the technical difficulties, thought about it a lot.  When I finally gave up, I knew why I was giving up, and I knew I had done my best.

Or should I say I thought I had done my best???  Some comments left last week suggested that perhaps I should revisit some of the series I had abandoned.  All I can say is that I will think about it.  Thanks to you all for reading!


Posted by Kathleen Loomis at 6:00 AM