When I defined my daily art project for 2017 as "found text," I had an envious eye on the work of Judy Kleinberg, who posts a daily poem on her blog.  I had been following her work for a few months and wondered if I could ever "write" that kind of poetry.  For the first few months of my own project, the answer was no.

I was having a good time with my stuff.  I did a lot of found haiku, a literary form that I have been doing for many years, and I came up with a bunch of new formats that are fun to make, such as theme collections from crossword puzzle definitions, like this: 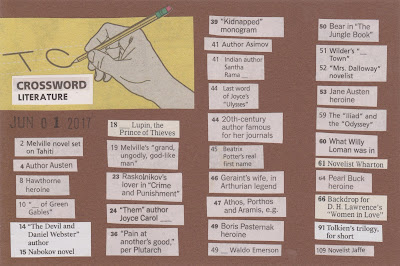 But I had a surprisingly hard time figuring out how to make compositions that act and sound like real poems.  What I realized was that reading the newspaper and searching for poem-like phrases was different from searching for theme words, such as my book of "early" and "late" references. Searching for poems requires you to not just read the newspaper story, but to be always aware of the words adjacent to it (on the page as printed, not in the text as written) -- perhaps words in the next column, perhaps words above and below.

A few years ago I was doing a lot of found haiku taken from reviews of books and art exhibits.  I set a rule for myself that my haiku had to fairly represent the views of the original critic; if the critic liked the book, I wouldn't assemble phrases that appeared to trash it.  But I have realized that the rules have to be different when you're searching for poems that sound and act like poetry.  In fact, my new rule is that the found phrases should be different from the writer's original meaning.  If all I did was to condense the writer's original message into shorter, pithier lines, that wouldn't involve much magic.

The opposite trap is to find original text that reads like or quotes poetic language to start with.  As an extreme example, think of a review of a book of poetry that quotes ten lines from one of the poems.  I could cut out one or two of those lines and they would make a Reader's Digest version of the poem that would be truly literary -- but that would be cheating.

After a lot of frustration and some rather lame poems, I think I've finally figured out how to do it right.  For the last couple of weeks I've been finding poems that I'm really happy with!  Here are a few of them, and you can check out all my daily text here. 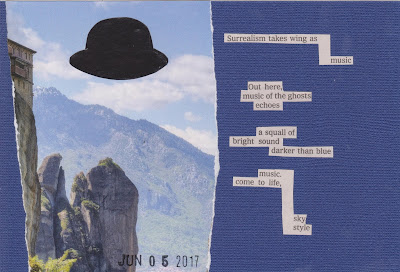 Out here,
music of the ghosts
echoes

a squall of
bright sound
darker than blue 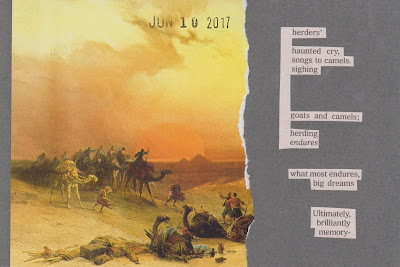 what most endures,
big dreams 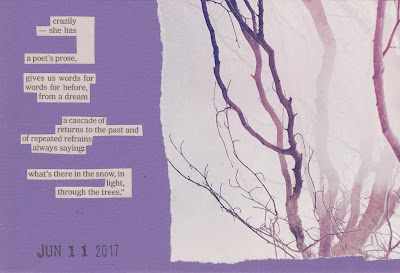 crazily
-- she has
a poet's prose

gives us words for
words for before
from a dream

a cascade of
returns to the past and
of repeated refrains
always saying:

what's there in the snow, in
light,
through the trees."