Earlier this month we attended the finals of the Van Cliburn Piano Competition, which occurs every four years in Fort Worth TX.  By the time we arrived, the field of 30 contestants, all aged 18-30, had been narrowed to six, and we got to hear each of them twice, once in a long piano quintet (piano plus string quartet) and once in a concerto with full orchestra. 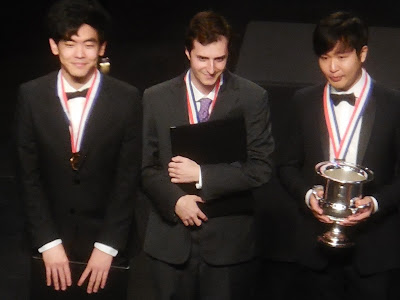 It was a great week for music but I've also been thinking about the scoring system.  During the whole three weeks of the competition the nine jurors were forbidden to talk to one another about the competitors or anything they played.  When it was time to cut the field of 30 down to 20, each juror was given a piece of paper with 20 blank lines, and wrote down the names of the 20 people he or she wanted to hear again.  A computer program digested the submissions and came up with the results.  At the very end, the jurors chose from among the six finalists by each writing down one name for first place (again, the computer digested the votes), then after the winner was decided, writing down one name for second, and finally one name for third.

The voting method was the subject of much discussion during the week, by spectators and by the jurors themselves.  Several of them, in a panel discussion, echoed the sentiments of the guy who runs the Cliburn, who said he was determined to have a competition without subjective decision-making.  He said too often competition juries make their choices by consensus, and thus the results can easily be swayed by the juror with the biggest reputation, the most forceful personality and/or the most articulate powers of persuasion.

This made me think about jurying in the visual art world.  I've participated in juried quilt, fiber and all-medium shows, both as an entrant and as a juror, and as far as I know, the prevalent model is for the jurors to confer among themselves.  Sometimes jurors look at the submissions independently to begin with, and might even winnow down the field with secret ballot voting in the early rounds, but the usual approach is for a lot of discussion and horse-trading towards the end, both in terms of selecting the entrants and awarding the prizes.

Often when there's a jurors' statement included in the show catalog, they will make a big point of how they talked it over for such a long time before they finally came to decision, or how there was much disagreement in choosing the winners.  I know from being a juror in several shows that the end-stage discussion can be heated and even testy.

And I wonder what would happen if art shows adopted the Cliburn method of scoring.  You might get shows with a little less cohesiveness (for instance, the Quilt National '13 that had hardly any pieced quilts!) but more variety, with more quirky outliers.  You might get shows with fewer of the usual suspects, those prominent artists whose work is easily identifiable and whom jurors sometimes seem embarrassed to leave out.  People who aren't on that usual-suspect short list might feel they have a better shot at getting into the show; people who are on the list might be a bit less complacent, a bit more likely to try something different and push themselves into new territory.

Would this make any difference in the world of juried shows?  Would it be better or worse than what we have now?  What do you think?