After I wrote about judging earlier this week, several readers left interesting comments -- rather than reply in the comment section, which people might not go back to, I thought it deserved a full post.

Irene commented that judges often focus on workmanship over design.  I think that may be true for shows that bill themselves primarily as quilt shows -- for instance, Houston and Paducah --  but less so for those purporting to have an art focus -- for instance, Quilt National and Art Quilt Elements.  At least I would like to think so.  I am continually amazed by the awards given at Houston in the categories labeled "art quilts" -- usually slavish copies of other people's paintings or photos get the big prizes.  Yes, that's good workmanship, but the task is simply one of accurately translating an image from some other medium into fabric.  It may take a lot of skill, but I don't think that skill deserves a $5,000 award.

Helen commented that judges are given way too little time to look at each quilt and don't seem to realize what they're all about.  That's true certainly for huge unjuried shows such as the state fair -- I've had occasion several times to be passing by during the quilt judging at the Kentucky State Fair, and they do whip through them pretty quickly (from the conversations I've overheard, they tend to zoom in on the quality of mitered corners and stitch length and then quickly move on to the next one).

In juried shows with a lot of entries there may be a tendency to zip through the early rounds too quickly.  I don't know if Quilt National has changed its procedures, but the first time I was accepted into that show (2003) there was much hoo-ha about their first-round system.  Each slide was put up on the screen for three seconds or so, and jurors had to vote yes or no.  Unless you got two votes you were out immediately. They were so proud of this system that they had a TV set over in the corner of the exhibit that was running a loop of about 25 actual entries, three seconds a pop, and visitors were invited to make their own judgments.  Some of the quilts shown had been accepted into the show and some had been rejected.  I remember this vividly because my quilt was one of the 25 in the guinea pig loop.  I have always wondered whether other people besides the jurors chose it on its three-second audition. 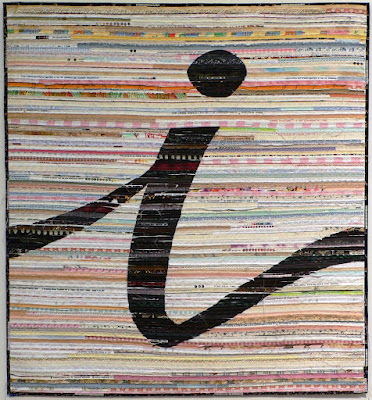 Most shows that I have juried don't have that many entries and thus allow jurors more time.  Now that the internet makes remote viewing easy, I have usually been asked to look at all the entries at home at leisure and send in my initial votes, but the serious discussion and horse-trading happens when everybody gets together, either in person or by phone.

More comments to respond to tomorrow.

(Thanks, as always, to everybody who leaves a comment!  It's much more fun to conduct a blog as a conversation rather than a lecture.)  (And still time to share your thoughts about judging.  Leave a comment after today's post or after the earlier one; I'll read them all.)


Posted by Kathleen Loomis at 5:29 AM