Sequoyah, the great Cherokee leader, born around 1776, fought in the War of 1812 under Andrew Jackson against the British.  He and his fellow Cherokee soldiers realized during the war that their inability to read and write was a serious problem: they could not write letters home, read military orders, or keep records.  After the war he resolved to create a system to write the Cherokee language.

He ended up with 85 symbols that represented syllables, and thousands of Cherokees learned to read and write the new alphabet.  By 1825 the Bible and many hymns had been translated into Cherokee, and Sequoyah began publishing a newspaper in 1828 using type produced by a Boston foundry.

After the Cherokees were driven from their homeland by their former commander, Jackson, Sequoyah had to abandon his printshop in New Echota, GA.  In 1958 archaeologists unearthed it and the type was cleaned up and used to print this proof sheet, which ended up in my father's possession and then in my own.  (This is just a display of all the characters in the font, not made into words.) 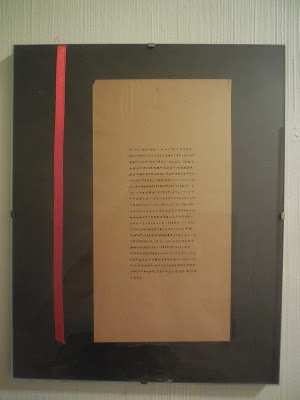 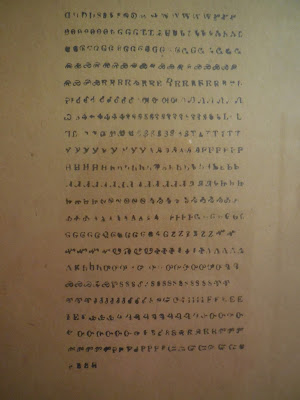 I am amazed at how tiny the characters are -- about the size of the stock market listings in the Wall Street Journal -- and how keen the eyes of the printer and his readers must have been to distinguish so many very similar characters.  Here's a contemporary version of the alphabet:

My dad acquired all kinds of strange and wonderful things in his long life and extensive travels, many of them related to printing, and they are among my most treasured possessions.  Although the technology of printing has changed dramatically within my own lifetime -- even within my own professional lifetime -- I am always inspired by reminders of the way it used to be.  One guy with a printing press, a font of type, and a vision can truly change the world.

PS Happy birthday, Dad!  I bet they have good newspapers in Heaven.