I guess it's sort of a good sign when people protest art -- at least it shows they are aware of art.  But many protests strike me as wrong-headed.  For instance, I just read about a protest of an artist from Mali who has an installation in Athens as part of Documenta 14, the big international show of contemporary art. 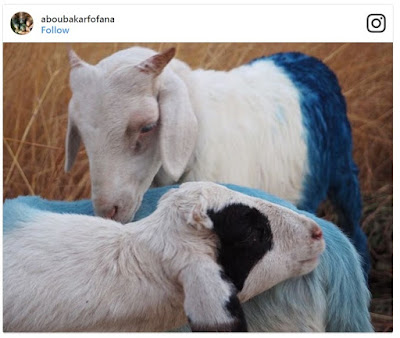 The artist, Aboubakar Fofana, set up natural indigo vats and dunked 54 lambs, turning them various shades of blue, to represent the 54 countries of Africa.  The lambs are grazing in a pasture during the run of the art show.  Sounds fairly benign to me, but animal rights activists have vandalized Fofana's studio and disrupted his opening presentation.

Since indigo is harmless (how many of us have walked around with blue fingers after a dye session and lived to tell the tale?) one might wonder what was so offensive about the stunt.  The vandals helpfully explained in a blog post, "You choose to say nothing about confinement, nor the massive murders of the industry, and you added to the humiliation (by using the sheep) as objects in the spectacle."

I think this installation, as described in my favorite online art newspaper, Hyperallergic, is delightful.  Fofana said, "I want to show something else with this special flock of lambs, and that is beauty.  Wherever African people move, we bring with us our culture and our traditions, and we fuse them with what is local.  And the new places we come to are richer and more beautiful for this fusion.  Out of the necessity of leaving, new cultures and traditions are born, nothing is static and nothing changes without creation.  Indigo itself is something which has travelled throughout and out of Africa along trade routes for thousands of years." 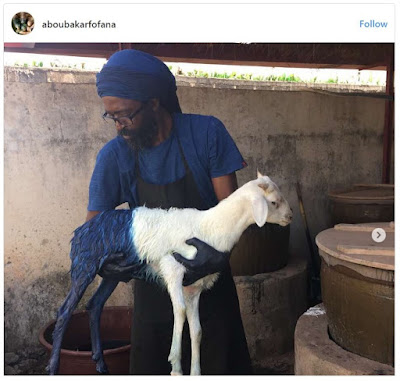 I believe that there's an important place for protest in today's world -- heaven knows there's plenty wrong going on -- and perhaps the industrial practices of the sheep industry belong in that category, although I have so far seen no evidence.  But this protest, and so many others I've read about recently, strike me as purely opportunistic.

It seems there are people with a cause who survey the world solely to identify a key word -- sheep! World War 1!  Ebola!  narcissism! -- and then do their damnedest to write an op-ed or get booked on a talking-head show or launch a Twitter hashtag or vandalize an artist's studio to flog their own cause or plug their new book.  Makes no difference whether the sheep in question is being mistreated or not, whether the new book actually has anything to do with the current event being "commented" upon.

Like so many other innocent bystanders in trainwrecks of various shapes and sizes, art gets trashed as collateral damage.  Oh well.  Only those who care about art are disturbed.


Posted by Kathleen Loomis at 8:43 AM