One more response to a comment left on my post about judging.  Charlotte wrote that there's a difference between "shows" and "exhibits" -- that shows are composed of a bunch of different things while exhibits are curated around some kind of theme or concept -- and that exhibits need to be cohesive but shows don't.  I think that's a very good distinction, except I'd add that exhibits don't even necessarily need to be cohesive.  The only reason I even mentioned the C-word is that so frequently you hear it in statements like "don't be hurt if your work if rejected from a show; it's probably perfectly wonderful but it just didn't fit in with the jurors' vision of a cohesive show."  I've always taken such statements to be (a) untrue (b) patronizing and (c) smarmy.

She also commented that talking things over with others helps you develop your ideas, and she always gets more out of a show by going with a friend and discussing the art.  I would agree 100 percent -- if you're talking about simply looking at art.  Indeed, that may be the subject of a whole different post next week!

But that's a different context than jurying and judging.  I would hope that people invited to be jurors or judges have already developed their own ideas pretty well.  As a juror or judge, your job is to look at the artwork and make critical decisions -- and they should be your own decisions.

I am not totally against discussion in the jurying or judging process, because sometimes I have found it to be helpful in reaching a consensus.  Some shows have multiple jurors for selecting which quilts get into the show, but then have just one judge choose the prizewinners.  This may be a good compromise approach.  (At the 2014 Quilts = Art = Quilts show at the Schweinfurth Art Center, I served on the selection jury and then was the sole prize judge.  I can testify that making the decisions all by yourself is a lot harder than doing it as a group!) 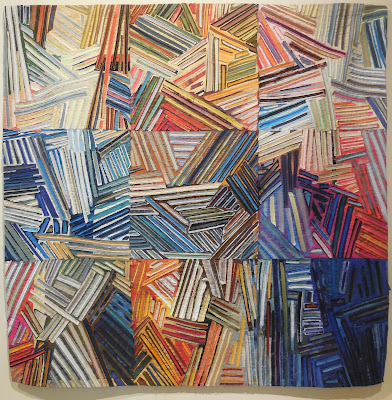 I'm not sure I would like to have totally blind judging.  But I can testify to the danger of being swayed by the strong personality in the room.

I once was on a jury that got together the afternoon before a show opened to look at the quilts in person and award the prizes.  We circled the room and looked closely at all the quilts.  Then we sat down to make the decision.  The show sponsor gave us a list of six or seven awards to give out.

One of the jurors was way higher on the food chain than the others and spoke first.  She wanted to start at the bottom of the list -- first we'd choose who got the honorable mentions, then who got the special awards, then choose third, second, and finally best in show.

Sure enough, after we gave out all the minor awards we ended up with arguably the two best quilts in contention for best in show.  We argued.  Eventually we chose one and the other one, instead of getting second prize, got nothing!  I felt guilty, even though the quilt I liked got the prize, because I thought we had shafted the other person, simply because of the weird process.  But two of us weren't able to overrule the big-cheese juror on an issue that she really wanted to win.

Would blind judging lead to better shows and better art?  I have no idea.  But it's interesting to contemplate.  What do you think?